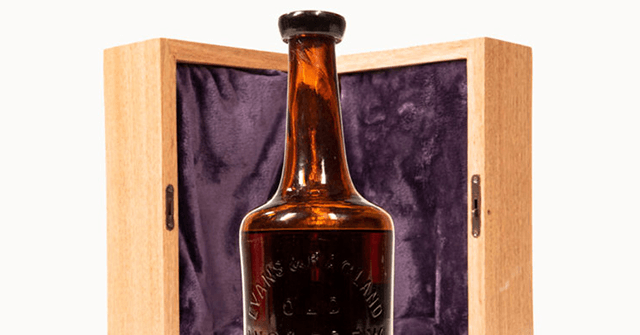 The bottle was so old, auctioneers did not know exactly when it was produced. The label, which was hand-typed and pasted onto the bottle, merely stated “This Bourbon was probably made prior to 1865,” the article said.

“A bit of carbon dating of the liquid inside narrowed things down — determining with 81.1 percent certainty that it was from 1763 to 1803 — and landing the tipple its ‘oldest’ title,” the magazine continued:

But for anyone concerned that all this ambiguity might affect the auction value of this bottle of Old Ingledew Whiskey, don’t worry. In an era where a single bottle of Scotch can sell for nearly $2 million, the world’s (probably) oldest whiskey sold just fine — more than tripling the pre-auction estimates of between $20,000 and $40,000 and fetching a whopping $137,000.

According to the Skinner website, the whiskey was bottled by Evans & Ragland, Grocers and Commission Merchants, LaGrange, Georgia.

“Archival information indicates that Evans & Ragland were active in business circa the 1860s-70s, and the bottle is consistent with glass manufacture circa 1840-70,” the site read.

The World’s Oldest Bottle of Whiskey Just Sold for for $137,000 https://t.co/N4DkUbnWuH via @RobbReport

The bottle was reportedly bought by financier John Pierpont Morgan during a visit to Georgia. It is believed his son, Jack, later gave the bottle to James Byrnes of South Carolina and two sister bottles to Franklin D. Roosevelt, who was a distant cousin, and Harry S. Truman.

“We have further confirmed that J.P. Morgan, Sr. did purchase the bulk of the madeira and whiskey from the Ridgely’s of Hampton House, in 1902, for approximately $7600, and the Ridgely’s typed inventory from 1901 lists ‘Old Bourbon- (purchased) about 1860,'” Skinner rare spirits expert Joseph Hyman told the magazine.

He also believes due to the “historical figures involved in the story, the market valued the bottle much higher than our estimates for a whiskey for which we, as yet, do not know who originally produced it.”