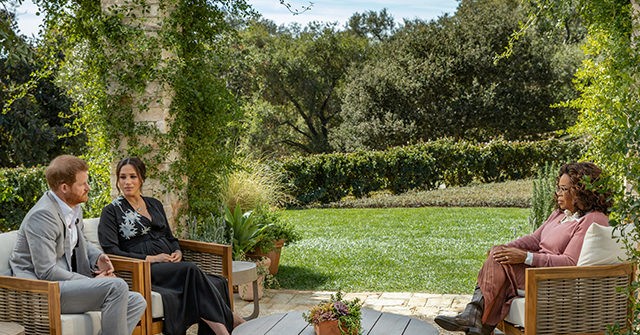 Prince Harry and Meghan Markle’s two-hour, tell-all interview with Oprah Winfrey has been nominated for an Emmy Award.

Oprah With Meghan and Harry: A CBS Primetime Special, which first aired in the U.S. on March 7, was among five nominees making up the Outstanding Hosted Nonfiction Series Or Special category when the nominations were announced Tuesday.

Harry and Meghan’s interview with Winfrey was viewed by more than 17 million people on its initial airing in the U.S. and was broadcast in the U.K. on the following night.

Worldwide viewship was estimated to be close to 50 million people.

Critics labelled it a celebration of “woke” self-absorbion by the Los Angeles-based couple, with a plurality of Britons thinking it “inapproriate.”

It came in the wake of the pair retreating from their official duties as working British Royals while cashing in heavily on the Windsor family brand, inking a production deal with streaming giant Netflix for an estimated $140 million.

The pair later signed a deal with Spotify to produce a podcast, believed to have netted the two another $25 million.

The winners will be announced at the 73rd Primetime Emmy Awards, with U.S.-based Harry and Meghan up against Stanley Tucci: Searching For Italy and My Next Guest Needs No Introduction With David Letterman.

As Breitbart News reported, a live audience will feature as a backdrop to the show this fall, after last year’s semi-virtual presentation delivered catastrophic ratings amid a slew of on-stage political rants.

The Emmy Awards will air Sept. 19 on CBS and will stream live on Paramount+.

Pelosi Slammed While Blaming Others For End Of Eviction Moratorium: ‘Is...