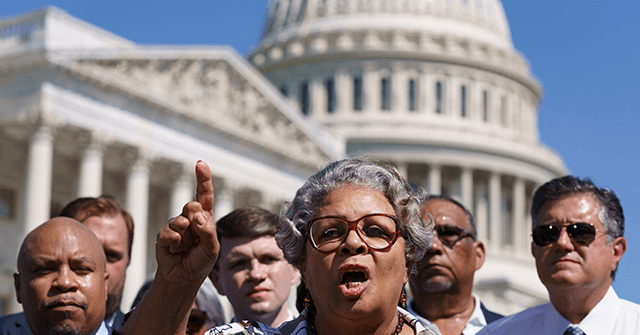 The members sang, “We Shall Overcome,” a Christian gospel song originally attributed to Charles Albert Tindley that was first published in 1901.

Shortly after the choral response, Texas State Rep. Gene Wu (D), one of the fleeing lawmakers, tweeted a photo of his “first meal as a fugitive.”

“Now I have an idea what AG Ken Paxton must feel like every day… it’s not bad. No wonder he keeps committing more crimes,” Wu said, calling Texas Attorney General Ken Paxton a fugitive.

The antics from the Democrats come as the Texas House voted Tuesday to have state troopers arrest the fleeing Democrat lawmakers.

The vote, 76-4, authorizes state troopers to arrest the members, along with possibly activating the use of arrest warrants to get them back into the state. State troopers, however, only have jurisdiction in Texas, whereby the members currently hiding in Washington, DC, are outside the grip of Texas law enforcement.

When the members eventually return after doing their press tour, meeting President Joe Biden, Vice President Kamala Harris, and Sen. Chuck Schumer (D-NY), law enforcement will guide the once-absent members to the chamber, where presumably a vote will take place on the election integrity legislation.

“As soon as they come back in the state of Texas, they will be arrested, they will be cabined inside the Texas Capitol until they get their job done,” Abbott explained Monday night.

Breitbart News reported Monday the pictures showing a myriad of smiling, maskless, Texas Democrats on a plane fleeing Texas to stunt election integrity efforts in the state, which would have placed additional restrictions on voting by mail, creating new ID requirements and expanding the freedoms for partisan poll watchers.