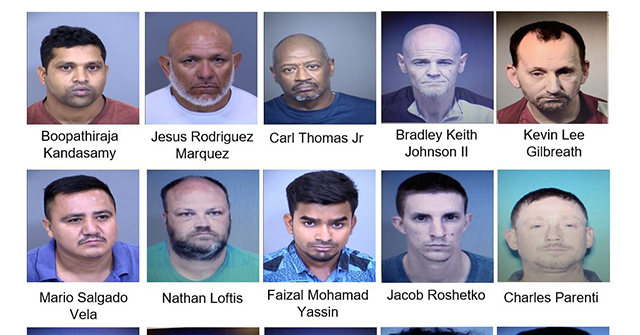 Arizona officials said 40 suspects have been arrested in connection with an operation targeting child sex crimes in the Valley area.

The Tempe Police Department said it joined with Homeland Security, the Federal Bureau of Investigation (FBI), the attorney general’s office, and police in Phoenix, Mesa, and Scottsdale for “Operation Behind the Mask,” Fox 10 reported Tuesday.

The effort was an undercover operation surrounding child sex crimes and human trafficking.

According to ABC 15, the suspects’ ages ranged between 20 and 64 and were arrested on multiple charges including child sex trafficking, luring, and attempted sex conduct with a minor.

Tempe Police shared photos of the suspects in a social media post Tuesday:

The Tempe Police Department recently partnered with several local and federal agencies on an undercover operation, “Behind the Mask,” targeting the demand for child sex crimes and human trafficking with a total of 40 suspects arrested thus far. pic.twitter.com/XmtjZTOTkT

“Children, as most people would understand and agree, are one of the most vulnerable groups when it comes to being victimized by suspects,” Tempe Police Sgt. Steven Carbajal explained.

“In this case, again we have adults that are knowingly reaching out to… looking for teens, seeking teens, seeking these acts with teens and that’s very concerning to us as a police department,” he added.

Human trafficking is defined as the illegal exploitation of an individual, according to the FBI’s website.

“Anyone can be a victim of human trafficking, and it can occur in any U.S. community—cities, suburbs, and even rural areas,” the agency continued:

Here in the United States, both U.S. residents and foreign nationals are being bought and sold like modern-day slaves. Traffickers use violence, manipulation, or false promises of well-paying jobs or romantic relationships to exploit victims. Victims are forced to work as prostitutes or to take jobs as migrant, domestic, restaurant, or factory workers with little or no pay. Human trafficking is a heinous crime that exploits the most vulnerable in society.