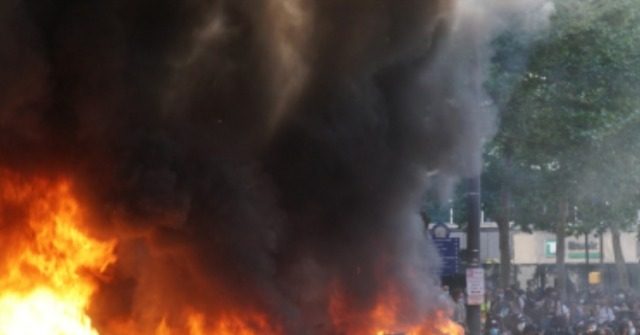 A man in Mason City, Iowa, is getting a lot of attention for saving a driver trapped inside her burning vehicle on Monday.

Jeff Rench told KIMT his wife Donna was going to work on County Road B20 at about 11:30 a.m. when she veered off the road and landed in a ditch, reportedly to avoid hitting a deer in her path, the outlet said.

The truck slammed into an embankment and landed on its passenger side.

However, as Jason Hahn was driving down the opposite lane, he saw her overturned truck and smoke billowing out of its engine and jumped into action.

“I got close enough to hear somebody in there. I heard a gal screaming for help. So then, you’re committed, right? Like, we gotta go now,” he recalled.

Hahn tried to free Donna by kicking in the windshield, but when that did not work, he used a shovel to break the glass and by that time, another man named Steve Fetketther had stopped to help.

“She was yelling for me to help her,” Hahn told KTTC. “The smoke was so thick. I got myself in the car, but it was hard to see her.”

Hahn used a knife to cut Donna’s seatbelt but as he crawled inside to get her out, the flames continued to grow and he knew they were running out of time.

Additional help arrived on the scene and Donna was brought to safety.

“Honestly, as soon as we got her out, the car was totally engulfed in flames,” noted Hahn, who also credited Fetketther for helping with the rescue.

Jeff called Hahn a true hero for his bravery in such a dangerous situation.

“We need more people like him rather than drive by and film it or take pictures and post it on Facebook. Thank God he jumped in there,” Jeff stated.

Hahn received 12 stitches for several cuts and Donna was taken to a hospital in Minnesota but has since returned home, the Globe Gazette reported.