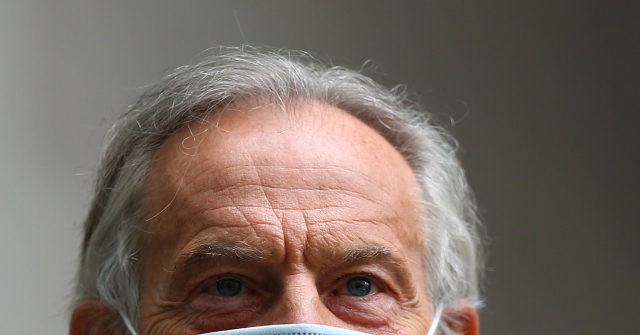 Former Labour prime minister Tony Blair has again called for the unvaccinated to be treated differently to the vaccinated, this time saying those who have had the shot should have a quicker process of exiting quarantine to mitigate against a “pingdemic”.

Despite Monday the 19th of July being touted as the long-awaited ‘Freedom Day’, where most restrictions have been lifted in England, there remains the order for all Britons to self-isolate if ordered to do so by through Nation Health Service (NHS) Covid Test and Trace app, which alerts users if they have been in contact with someone who has the Chinese coronavirus.

Vaccine Minister Nadhim Zahawi confirmed on Monday that after August 16th and “if you’re double vaccinated you don’t need to isolate”, meaning that those who are not vaccinated would still be subject to quarantine after that date. The media has reported in the last week of a “rising number” of people simply deleting the apps, including many medics.

‘Freedom Day’ has sparked concerns of a so-called ‘pingdemic’, where high numbers of people are told to self-isolate, as a result of more people mixing, which could lead to staff shortages and has lead to some business closures already.

In the first week of July, the app pinged more than half a million people.

“The vaccinated, if pinged, should be able to take a rapid test and, if negative, not isolate; you could repeat, say, after three days but unless symptomatic, they should be free. The unvaccinated would take a series of tests, and could have a shorter isolation period,” Mr Blair quoted of the findings from his own Institute for Global Change — essentially proposing that the unvaccinated need to undertake more measures than the vaccinated to prove they are not at risk of spreading the Chinese virus.

The anti-Brexit former prime minister also backed Boris Johnson’s call for large venues to use the Covid Pass, essentially a vaccine passport proving vaccination or a negative test result. The government later quietly added smaller hospitality venues like pubs and restaurants to its recommendations for the use of the vaccine passport.

“We should keep the mandate for masks on public transport and other indoor public spaces,” Blair added, after London’s Labour mayor Sadiq Khan ordered Transport for London (TfL) to make mask-wearing a condition of carriage to customers.

The globalist-progressive also called for 12- to 16-year-olds to be vaccinated, “not because they are at risk, but because they can spread it”.

Mr Blair has appeared to use the pandemic as a comeback, of sorts, after he finally lost his battle to stop Brexit last year. He was calling for “health passports” as early as December 2020.

“I know all the objections, but it will happen. It’s the only way the world will function and for lockdowns to no longer be the sole course of action,” Blair had said at the time.