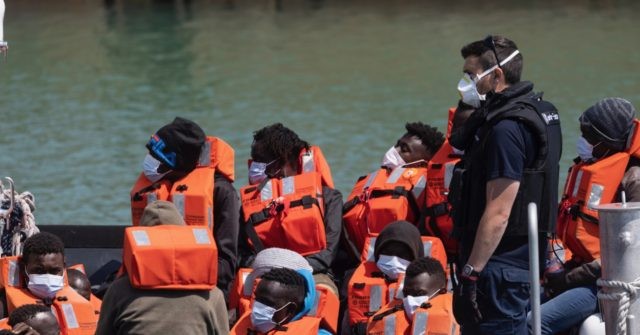 Brexit leader Nigel Farage has predicted that 30,000 illegal boat migrants will reach Britain by the end of the year, claiming that the migrant crisis is “totally out of control”.

Speaking from a beach in Dungeness in Kent on Monday, Mr Farage shared more footage of illegal migrants being brought ashore in Britain.

He said that there were a few children on board, which he predicted would be the focus of the mainstream media. However, Mr Farage said that “as ever its over 85 per cent young men between 18 and 30”.

“If they are really refugees and they are coming from countries that are so awful why are they deserting all the women and children, none of this actually adds up,” Farage said.

The Brexit leader also shared footage of the Royal National Lifeboat Institution (RNLI) purportedly bringing migrants ashore at the port of Dover. Mr Farage said that he had spoken to a man who had worked for fifteen years on a lifeboat who resigned as ferrying migrants into Britain was “not what he signed up for”.

Farage said: “These local communities have been part of lifeboats for 200 years, they know what it has become, a taxi service, frankly operating to make the criminal gangs huge amounts of money.

“I’ll predict this, I said eight weeks ago that I thought the number that will come will be 20,000, at this current pace it could even be 30,000. It is totally out of control.”

“I have no confidence that Boris Johnson, Priti Patel, or any of them have the guts or the courage to deal with it,” the Brexiteer lamented.

This will be the biggest story in British politics by the end of summer. pic.twitter.com/dVIuVRuAAI

The increase in Farage’s prediction comes as over 800 illegal boat migrants came ashore since Saturday, taking the total number of aliens who reached the UK this year to approximately 7,000.

The BBC’s chief migrant reporter, Simon Jones said: “346 migrants reached the UK on Sunday in 15 boats – making it the busiest day this year for Channel crossings.”

Mr Jones went on to reveal that an additional 254 migrants travelling in nine boats reached the UK on Monday.

“The danger of these crossings was seen on Sunday, when one of the boats carrying around 40 people split, meaning some had to be rescued from the water,” Jones added.

The Daily Mail reported that 225 migrants arrived on Saturday, meaning that some 825 illegal aliens reached the UK in just three days.

Analysis conducted by the paper also put the total number for the year at around 7,000, more than double the number seen during last year’s record-setting wave of migration.

Clandestine Channel Threat Commander Dan O’Mahoney said: “We are seeing an unacceptable rise in dangerous and unnecessary small boat crossings because illegal migration across Europe has led to a significant increase of migrants in northern France seeking to enter the UK illegally.

“The government continues to target the criminal gangs who are responsible for these illegal crossings at every level with intelligence and surveillance, and the joint work with France means we have doubled the number of police officers on the ground in France who are intercepting the crossings and arresting the gangs behind this trade.”

More Illegal Boat Migrants Landed in Britain in June Than Whole of 2019 https://t.co/D1iDd0fqdJ

The spike in migration came amid relatively calm conditions over the weekend but also, perhaps more notably, just days after Home Secretary Priti Patel introduced a series of migration reforms before Parliament.

The legislation would supposedly prevent migrants who came to the country from receiving citizenship through asylum status as well as possibly establishing a legal route to offshore asylum seekers in a third country while their claims are assessed.

While the Home Secretary has repeatedly promised to get tough on illegal migration — even proposing increased jail time for illegal migrants as a deterrent — the Crown Prosecution Service (CPS) dealt a severe blow to this prospect, announcing last week that it would refrain from prosecuting most illegal migrants.

The CPS claimed that illegal migrants should be deported rather than being prosecuted, however, the UK has only managed to sign a migrant removal pact with Albania in the seven months after leaving the European Union and has seen a drastic decline in successful deportations over the past year.

Nigel Farage: “Would it be wrong to use the word invasion? Take a look for yourself.” https://t.co/Sn5HsXFWdY