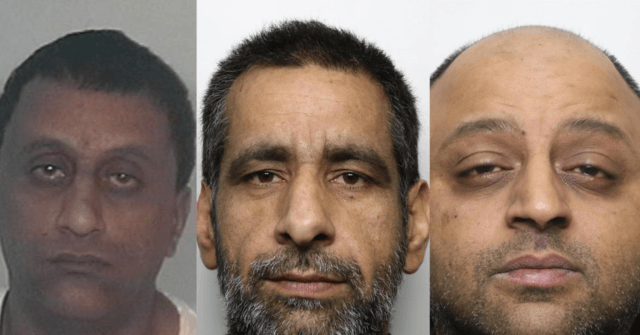 Banaras Hussain, Mohammed Akram, and Talish Mahmood Ahmed have been jailed for grooming and raping a thirteen-year-old schoolgirl in Huddersfield, England.

Leeds Crown Court heard during the trial that the girl was raped in her primary school playground and even in her own bedroom after one of the groomers, Mohammed Akram, clambered up the drainpipe of her house.

The prosecutor in the case, Kate Batty, told the jury, per a court report from Yorkshire Live, that by the time she was 13, the victim was “intoxicated most of the time”, being plied with vodka, lager, cigarettes, and amphetamines by her abusers.

Mrs Batty said the teenager was treated as an “object”, adding: “Routine to her became the day in, day out events of being touched or groped or having sex on grubby mattresses on the floors of flats and houses that she found herself in.”

The “primary groomer” in the case, then-married Banaras Hussain, was accused of sexually abusing the victim at least twice a week over the course of a year in the woods or in the primary school playground.

“He took her to a house one day where again the alcohol and drugs were free-flowing,” the prosecutor said, adding: “In the bedroom of that house, she lost her virginity to him on a mattress without bedding, using a curtain as a blanket.”

Hussain was sentenced to 18 years, but he will, like his fellow predators, likely serve far less than this in prison, as criminals in Britain are typically entitled to automatic early release on licence halfway or two-thirds of the way through their sentences.

Banaras Hussain, Mohammed Akram, and Talish Mahmood Ahmed have been convicted of raping a vulnerable schoolgirl from the age of 13 in Huddersfield, England https://t.co/zQAzbWCHci

Mohammed Akram was accused of first raping the girl when she was 15-years-old, on an airbed mattress while the groomer’s then-girlfriend was still in the bed.

“On a second occasion, when she was still 15, she was at her father’s house when he climbed up the drainpipe and into her bedroom,” the prosecutor said.

“Again, she was intoxicated and again he abused her before leaving in the early hours of the morning so that her father didn’t become aware that he was in the house.”

Akram, 44, was found guilty on two counts of rape and one count of indecent assault, resulting in a notional thirteen-year sentence.

The third groomer in the case, Talish Mahmood Ahmed, was accused of spiking the drink of the victim — who was still aged 15 at the time — before taking her to a secluded location to rape her.

Prosecutor Batty said: “Talish Ahmed was a passenger. She remembers him being in the back with her. He abused her when she was in no fit state to consent; a state that they had deliberately put her in so that she could be raped.

“Once they were finished with her, she was dumped, thrown out of the taxi at the end of her street with her knickers and trousers round by her ankles. They couldn’t even be bothered to help her get dressed again.”

Talish Ahmed, 41, was sentenced to a notional ten years after being convicted on one count of rape.

The rape committed by Ahmed was said to be the “final straw” for the victim, who reached out to the local police on November 25, 1997.

However, as has been the case with many grooming gang victims, the plaintiff said that she was “let down” by the police, who didn’t take any substantive action for years.

“She gave a statement to the police and was medically examined. Despite that, no action was ever taken,” Ms Batty said.

“It’s not entirely clear why but what we do know is that things have come a long way since the late 1990s in terms of our understanding of sexual offending,” she claimed, although there was never a time when the law was not perfectly clear about sex with children being a crime.

Last year, it was revealed that police in Rotherham police overlooked decades of abuse committed by members of “Asian” rape gangs out of politically correct fears.

A report from the Independent Office for Police Conduct (IOPC) said that a senior officer in Rotherham told a father of a missing girl that the city “would erupt” if the public was made aware that “Asian” grooming gangs were sexually abusing young white girls, for example.

UK: Police Told to Look for ‘Other Ethnicities’ as ‘Asian’ Grooming Gang Preyed on Girls https://t.co/cvKGT9iFGj