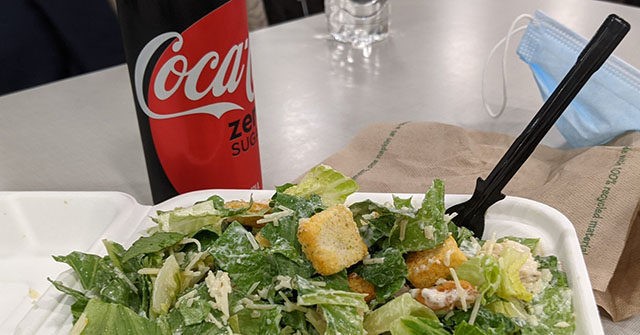 Wu posted a photo of a Caeser salad and Coca-Cola Zero with the caption, “My fist meal as a fugitive. Delicious.” Wu misspelled “first.”

It did not take long before others began mocking his embarrassing typo and tweet.

Even retired Sen. Orrin Hatch (R-UT) got in on the fun:

I have fugitive meals available for any representative on the run. pic.twitter.com/MHPSKyy6sI

More than 50 Texas state Democrat representatives fled the state in order to deprive Republicans of a quorum for a special legislative session to consider voting laws.

They tweeted photos of themselves on buses, planes, and tarmacs headed one-way for Washington, D.C.

In one photo, a case of Miller Lite beer can be seen on a seat aboard a plane, surrounded by smiling and maskless Democrats.

State Rep. James Talarico (D) tweeted a photo of himself on a tarmac in Memphis, adding that they “left behind” families, their “livelihoods,” and their “beloved Texas”:

Just landed in Memphis on our way to DC. Thank y’all for your well wishes. We left behind our families, our livelihoods, & our beloved Texas. But our sacrifice is nothing compared to the sacrifices brave Americans have made throughout history to protect the sacred right to vote.

He also said they left behind “kids, elderly parents, & sick loved ones.”

“We’re prepared to stay out of Texas for the rest of the session,” he tweeted. “This decision wasn’t easy. Many of my colleagues left kids, elderly parents, & sick loved ones. Many are risking their day jobs & their seats in the House. But we won’t sit by & watch democracy wither on the vine.”

This is the second time Democrats have tried to derail Republicans from passing voting laws, which is expected to ultimately occur, according to the Texas Tribune.

Democrats also walked out in May to prevent Republicans from passing a voting bill at the end of the regular legislative session.

Texas State House Speaker Dade Phelan (R) said in a statement that he “will use every available resource under the Texas Constitution and the unanimously-passed House rules to secure a quorum,” according to the Tribune.

“As they fly across the country on cushy private planes, they leave undone issues that can help their districts and our state,” he said. “The Democrats must put aside partisan political games and get back to the job they were elected to do.”