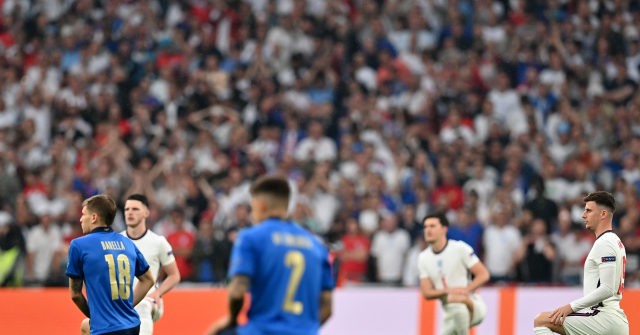 The Andrew Neil-run GB News, which touted itself as the ‘anti-woke’ antidote to the mainstream media, has apologised after one of its presenters took the Black Lives Matter-inspired knee on air in response to racist abuse directed at three black England players on social media after Italy defeated the team in the Euro 2020 finals on Sunday.

The move came after reports that since the Marxist-linked gesture was made, some broadcasts on GB News had attracted zero viewers according to the industry-standard Barb figures.

On Tuesday’s show co-host Guto Harri, a former BBC journalist and Boris Johnson’s former spin doctor, told fellow host Mercy Muroki and GB News viewers as he positioned himself at the front of the set and got down on one knee: “With the benefit of hindsight, I may have underestimated how close to the surface the racism still was.

“I actually now get it, and so much so, that I think we should all take the knee. In fact, why not take the knee now and just say, ‘It’s a gesture, but it’s an important gesture.'”

Late on Thursday, GB News released a statement on Twitter related to the segment and said while employing the critical race theory-linked term of ‘anti-racism’: “GB News stands four square against racism in all its forms. We do not have a company line on taking the knee. Some of our guests have been in favour, some against. All are anti-racist. We have editorial standards that all GB News journalists uphold.”

In the following sentence, GB News denounced Harri’s political gesture, saying: “On Tuesday a contributing presenter took the knee live on air and this was an unacceptable breach of our standards.”

Followed by the milquetoast: “We let both sides of the argument down by oversimplifying a very complex issue.”

The news channel’s reporting on Harri making the gesture appears to have since been removed from the site.

GB News has also allegedly taken Harri indefinitely off the air, according to station sources speaking to The Guardian on Friday.

In response, Ben Harris-Quinney, the chairman of the world’s oldest conservative think tank, The Bow Group, told Breitbart London: “Andrew Neil was previously at The Times, The Economist, The Spectator, and BBC. He’s a consummate Neo-Liberal, the same as Blair, Cameron, May, Boris, and pretty much everyone else in the establishment.

Mr Harris-Quinney said that after Neil left the BBC, “he spotted a gap in the market to court conservatives and Brexiteers. But he isn’t one and has no intention of upsetting a status-quo that made him rich.”

The Bow Group chairman continued: “The con is the same as the modern Conservatives: Pretend to be right-wing, grab the votes of conservatives, but actually support the progressive status quo — with a bit of red meat to keep the masses docile.

“The Conservatives and GB News are designed to keep us just pacified enough that we don’t revolt. If we want real change, we need to do the research on people like Boris and Andrew Neil and reject the big establishment con.”

The broadcaster’s apology may perhaps have been prompted after viewers, who may have sought out GB News as an alternative to the leftist mainstream media, tuned out.

After Harri took the knee, some of its broadcasts for the rest of the week attracted zero viewers, according to audience figures by the rating agency Barb seen by The Guardian and reported on Thursday. Wednesday’s show with Liam Halligan and Gloria De Piero at 1pm saw no measurable audience, while Sky News saw 50,000 and BBC News 62,000 views at that time. Audiences for GB News again dipped to zero at 5 pm that day during a programme hosted by Alex Phillips and Simon McCoy.

GB News had initially received strong viewership on launch, beating both BBC News and Sky News on its first night of broadcast.

Messages on social media directed at the news network reported by the newspaper include those calling for a boycott and even suggestions GB News should feature itself in its nightly Woke Watch programme.

However, even the woke England manager Gareth Southgate admitted that “a lot of that [abuse] has come from abroad”. The establishment Reuters news agency quoted Premier League data that 70 per cent of the racist abuse came from outside of the United Kingdom.

While Sanjay Bhandari, from the campaign group, Kick It Out, said that 70 per cent of racist remarks directed at football players in the last two seasons had come from overseas.

Mr Bhandari is quoted as saying in the leftist New Statesmen: “These are not football fans… They are people who have never been inside an English football ground.”

Fans Boo But England ‘Determined to Take the Knee’ Throughout Euro Championship https://t.co/sFU8KBXpFz