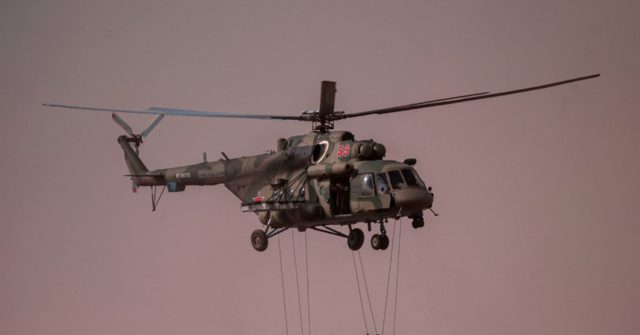 The Kremlin warned on Friday “full-scale military activities” could occur in eastern Ukraine, blaming increased tensions on the Ukrainian government even as Moscow continues massing forces along the border, to the growing concern of Europe and the United States.

“There are concerns that Ukraine’s civil war will resume. And if a civil war with full-scale military activities resumes near our borders, it will pose a threat to Russia’s national security,” Kremlin spokesman Dmitry Peskov said at a press conference on Friday. Peskov carefully referred to the situation as a “civil war” despite Ukraine extensively accusing Russia of meddling by supporting and equipping separatist rebels in the region.

“The current developments and Ukraine’s behavior in general create the risk of full-scale military activities. It is clear from various statements that Kyiv does not completely reject the idea of using force to resolve its issue with the southeast,” Peskov claimed.

The Kremlin said on Friday that German Chancellor Angela Merkel asked Russian President Vladimir Putin to de-escalate the situation by pulling his forces back from the Ukrainian border. Putin replied that Russia “has a right to move its military forces around its territory the way it likes.”

Fox News on Thursday rounded up various analysts who said Putin is most likely bluffing, playing to domestic audiences with a bit of militarized nationalist posturing, reminding the West that Russia is still a significant military threat, goading the United States into spending more on advanced weapons, or throwing a fit after President Joe Biden called him a “killer.” None of these analysts thought Russia was making serious plans to invade Ukraine.

The BBC was less sanguine, quoting a top Russian official’s warning that Moscow is ready to “intervene to help Russian-speaking residents in eastern Ukraine if Ukraine launches an all-out assault on separatists there.”

“Everything depends on the scale of the conflagration,” said Dmitry Kozak, deputy head of Putin’s administration.

Kozak said that if Ukraine does something to warrant Russian intervention, it could be the “beginning of the end” for its existence as an independent nation, warning that Moscow will respond with “not a shot in the leg, but in the face.”

Putin and his officials have been suggesting for several years that Ukraine may be planning an ethnic cleansing campaign against ethnic Russians in the eastern Donbass region. Kozak compared the alleged threat to the 1995 slaughter of Muslims in Srebrenica by Bosnian Serbs.

“If, as our president says, there is a Srebrenica there, we shall probably have to come to their defense,” Kozak said of Donbass.

Russia’s military presence on the Ukrainian border has reportedly reached levels not seen since Russia annexed the Crimean peninsula in 2014. Ukrainian officials generally downplay the possibility of major escalation, while expressing concern about the death of Ukrainian soldiers from shells fired by the Donbass separatists.

Ukrainian President Volodymyr Zelensky visited the front lines in Donbass on Friday. He said the ceasefire agreement has been “systematically violated in recent days” by the separatists, and told his forces to maintain their “fighting spirit.”

“Thank you for keeping people calm and defending our land,” Zelensky told the troops as he presented several awards.

The Turkish government announced on Friday that two U.S. Navy warships will sail through the Bosporus Strait next Wednesday, en route to the Black Sea. A Turkish Foreign Ministry official said the notification was passed through “diplomatic channels” 15 days ago. U.S. forces in the Black Sea are well-positioned to monitor Russian activity on the Ukrainian border.

Russia criticized the announced Black Sea deployment for “creating false illusions” in the minds of Ukrainians and giving the U.S. a pretext to “strengthen their own presence in the region.”