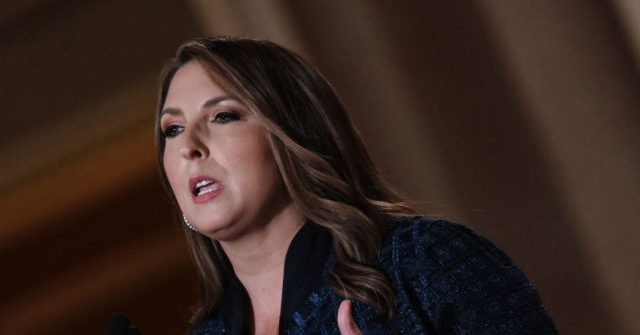 Ronna McDaniel, chairwoman of the Republican National Committee (RNC), told Breitbart News Daily there is “no way” the RNC will allow establishment media figures to moderate the 2024 Republican primary debates — if she believes the journalist wants the candidates to fail. She warned that the RNC may encourage the eventual 2024 GOP nominee to refrain from working with the Commission on Presidential Debates if it does not make “significant changes.”

McDaniel explained that primary debates are controlled by the RNC, noting they have “a lot of say on the moderators” in those scenarios.

“And no way would I want to put our candidates in a position where they’re being put in front of a moderator who wants to see them fail, ok — who has a bias that we know and is obvious,” the chairwoman said.

“The second of that is the Commission on Presidential Debates, which isn’t governed by the RNC. That’s governed by the nominee, the candidate, once they get the nomination. However, we have actually called on the Commission on Presidential debates to have more transparency” and term limits, she said, adding they “may encourage our candidate not to work with them” if they do not make “significant,” common-sense changes.

“Maybe don’t start the debates after a huge proportion of states have started voting. Or maybe don’t pick a moderator who interned for the Democrat nominee for president like Steve Scully did for Joe Biden,” she said.

“So these are things we are starting now, because what many people don’t know, and this is in the weeds, the RNC passes the rules to govern the 2024 election in the next year. We can’t pass rules after 2022 because you don’t pass rules once the players are on the field. So we only have a chance to deal with this within the next year and a half and that is why I sent — I hope you’ve seen — a very tough letter to the Commission of Presidential Debates because we have to fight for our 2024 nominee right now,” McDaniel added.

Marlow asked McDaniel if the RNC has a process yet for determining who will moderate the GOP primary debates.

“I’ll speak to this on behalf of the whole audience. It will be very heartbreaking if yet again we have to watch conservative candidates thrown to people who want to destroy them for these debates,” the editor-in-chief said.

McDaniel said they are working on it right now, and the commission is slated to meet in August.

“I don’t know if the moderators will be set before that,” she said. “Because once the nominees come forward, they will have some say in that, but certainly, some criteria will be put forward by the committee that will make sure our candidates are not put in front of a moderator that doesn’t want to see our candidate succeed or is biased towards the Democrats or planting questions like we’ve seen in the past, to ultimately hurt our nominee once they get into the general election.”