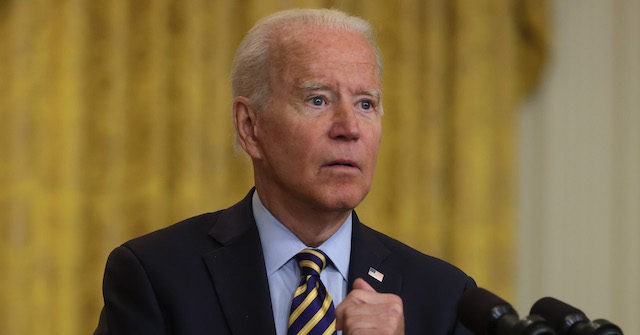 The White House is looking to shift its messaging on so-called “infrastructure,” again, according to a report.

After the White House spent months trying to get the partisan “infrastructure” wish list in order with a “dual-track approach,” President Joe Biden is trying to, again, use the umbrella of his “Build Back Better” campaign, Politico reports.

Biden is using his “Build Back Better” as an effort to rope in Democrats who are raising some concerns on the “myriad” proposals on the Democrats’ “infrastructure” wish list since the proposals have reportedly become too confusing for supporters.

Last month, a pro-Biden super PAC, Unite the Country, released a memo saying Biden voters across the country are overwhelmingly clueless about any of his accomplishments, which some supporters and Democrat leaders have long worried about having an effect on Democrats in the midterms and possibly 2024.

Concerns have been raised to the administration in various emails and meetings, according to six anonymous people familiar with the discussions who told Politico. The report indicated that the concerns became more intense after the president looked to strike a deal with Senate Republicans to work on a bipartisan deal. The deal was a scaled-back Biden “Jobs Plan” that “dramatically reduc[ed] the climate components of that proposal.”

The report added that Climate activists, while arguing their initiatives, said they do not fit in the “parallel-moving” plan for “families.” Their climate wish-list would be placed alongside items like paternity leave, education, and childcare, which would make passing the plans harder, but easier for Republicans to criticize.

The White House and Democrats, while trying to use Biden’s “Build Back Better” agenda as a cover, are trying to use simpler framing to try and gain broader support. In return, Democrats are trying to get an easier passage on the “Families” Plan, since they will likely not have any support from Republicans.

Activists say they’ve already seen a change from the administration. In a speech last week in Illinois, Biden laid out the second half of his plan under the banner of Build Back Better. Press secretary Jen Psaki has made references to BBB in multiple briefings during July, including one where she said the White House was now calling the “reconciliation” package the “Build Back Better plan.” And Gina McCarthy, the White House’s domestic climate czar, issued a memo laying out all the climate initiatives they want pursued through the reconciliation package. Even after the changes, those close to the process noted that some of the old terms could crop up occasionally.

Last week was the one-year anniversary of the President’s Build Back Better platform, and this plan will realize the promises he made on the campaign trail with game-changing policies for education and childcare, as well as other crucial, job-creating priorities on climate and housing that economists agree are many of the best ways to propel growth and strengthen the American middle class. … The President is focusing on the benefits that this proposal and the bipartisan infrastructure framework will deliver for everyday people.

A longtime Democratic operative, Simon Rosenberg, said that having the White House move everything under Biden’s “Build Back Better” agenda was a smart course correction.

“It connects people back to the President’s two core and most important promises — defeating Covid and leading the country through the recovery — and it is a simple clear statement about what he’s doing,” Rosenberg said. “All the various plans got confusing — this makes it all simple, and powerful, again.”

Steve Schale, the CEO of Unite the Country, the group that said most of the country is “clueless” of Biden’s accomplishments, said, “Changing the logo, changing the brand — I mean, in the end you still have to have something that goes out and sells it, and informs.”

“We can’t assume that people in our base know what he’s doing,” he added.