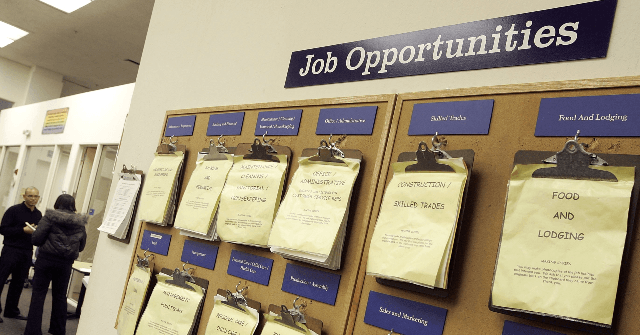 The generous unemployment benefits in the United States have prevented over seven million people from accepting a job offer, according to a recent Morning Consult poll.

The week before the poll was conducted, the week ending June 19, there were 14.1 million adults who received unemployment benefits, which is the most recent estimated total of recipients from both the state and federal programs.

The poll shows that the generous unemployment insurance benefits from the government have greatly reduced the number of job offers accepted by an estimated 7,050,000 million throughout the course of the Chinese coronavirus pandemic.

Only 50 percent have said they turned down a job because of the need to take care of children, family members, coronavirus, or health reasons.

The other 50 percent said they turned down a job because the offer was unattractive to them economically, like not enough or tooo many hours of work, did not allow remote work, and not the “desired” industry.

That is exactly what high levels of benefits were predicted would happen, reflecting a disincentive to accept work created by the extra benefits.

Typically, those on unemployment are not allowed to turn down suitable jobs and keep their benefits. As the Wall Street Journal explained, typically, “quitting a job or refusing a job offer disqualifies a person from receiving unemployment benefits.”

“If you refuse a job or don’t show up when called back to work, the employer is supposed to report that to the state unemployment agency, which can end your benefits,” the report added.

Not being allowed to work remotely would not typically qualify as making a job not suitable, for example. Many states, however, suspended rules requiring employees to search for jobs during the pandemic. What’s more, the agencies administering unemployment benefits have been overwhelmed by the extraordinary amount of applications during the pandemic that many have effectively ceased or slowed down enforcement of rules requiring beneficiaries to accept work.

By the end of July, there will be a total of 24 states that will have phased out the extra benefits. Two states—Indiana and Maryland—that decided to end benefits have been ordered to continue them by federal judges. This means there could potentially be roughly seven million more people rapidly looking to join the workforce as the benefits go away.