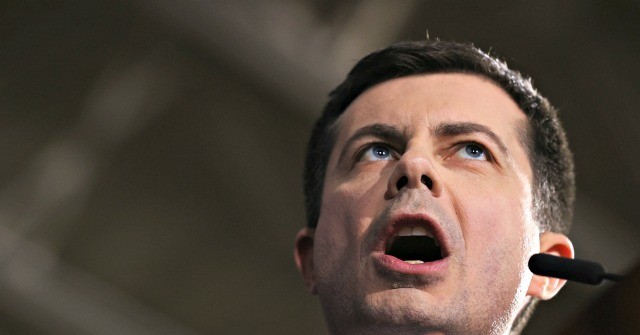 The nearly $1.2 trillion plan, hanging on by a thread with the support of 11 Senate Republicans, spends heavily on electric vehicles and other Democrat pet causes redefined as “infrastructure.”

Buttigieg pitched the plan to the news station, saying “As the West has been impacted by extreme weather events and some of the heat waves that have been going on, this is not going to go away.”

He added, “We need to take serious climate action to stop it from getting worse and that’s part of what will happen, thanks to these investments we’re proposing to make on everything from electric vehicle infrastructure to more resilient infrastructure planning in our communities.”

Buttigieg touted the current bipartisan support for the plan, based in part, on “financing” that includes increased activity by the Internal Revenue Service to pursue taxpayers.

U.S. Sen. Jerry Moran (R-KS) told Politico that idea “has some red flags among Republicans,” who are concerned it will lead to targeting by the Biden administration.

“Part of the motivation is trying to make certain that we don’t spend $6 trillion,” he said, something the likes of Sen. Bernie Sanders (I-VT) has indicated is possible. If “this is lending itself toward that outcome then I would no longer be a yes at that point in time.”

Another Republican senator in the group of 11, Mike Rounds of South Dakota, said he is not “100 percent committed to voting for the bipartisan plan,” according to Politico.

“We don’t know what’s in it yet,” Rounds said. “I’m favorably impressed with what’s been done, but we’re going to wait and look at the final thing. So there’s still a lot of negotiations going on.”

“We need Congress to act, pass this through the House and Senate and get it to the President’s desk so we can sign it,” the tansportation secretary told KTLA.

Kyle Olson is a reporter for Breitbart News. He is also host of “The Kyle Olson Show,” syndicated on Michigan radio stations on Saturdays — download full podcast episodes. Follow him on GETTR.