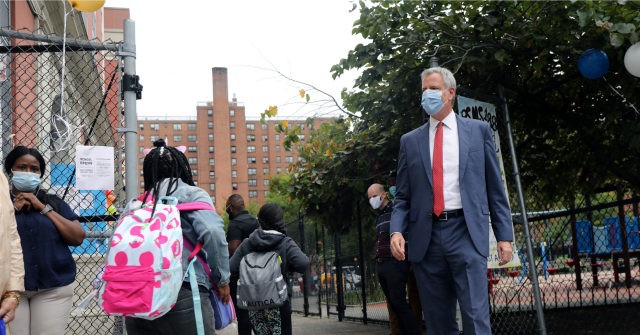 De Blasio bucked the recommendation from the Centers for Disease Control and Prevention (CDC) and instead embraced the position of the teachers union.

“There will be a lot of communication before school and once it begins for now assume we are wearing masks,” de Blasio told reporters Monday, according to AMNY.

“But that could change as we get closer…we will be driven by the data and see what the science has to say,” he claimed.

“By the end of the school year positivity in the schools was almost non-existent… so we are going to keep a lot of those same pieces in place,” de Blasio said of the mask policy.

Newsweek reported in May that the AFT “will continue to push for face masks to be worn in schools,” regardless of vaccination status or what the CDC recommends.

Union President Rhonda “Randi” Weingarten told the magazine that 89 percent of teachers were vaccinated at that time.

The New York State Department of Health is currently reviewing the amended guidelines and their decision on whether to relax mask wearing requirements in schools could impact whether the DOE adopts the new CDC recommendations. But for now New York City public school families should expect that teachers, staff and students regardless of vaccination status will need to face coverings in classrooms this fall, according to de Blasio.

The UFT has insisted “safety” is the union’s top priority:

The CDC has issued new guidance for the nation’s schools as planning continues for September. Safety will continue to be the UFT's top priority as we review the CDC's recommendations with city and state agencies.https://t.co/XhmhyEI7xA

“Safety will continue to be the UFT’s top priority as we review the CDC’s recommendations with city and state agencies,” the union posted via Twitter on Monday.

Kyle Olson is a reporter for Breitbart News. He is also host of “The Kyle Olson Show,” syndicated on Michigan radio stations on Saturdays — download full podcast episodes. Follow him on Parler.

How to be an Anti-Extremist