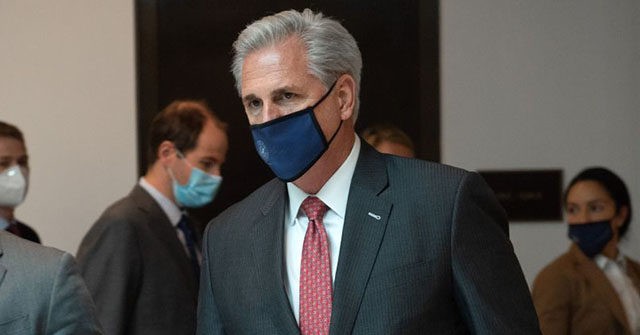 The National Republican Congressional Committee (NRCC) announced a massive fundraising haul for the first quarter of 2021 as the campaign arm gears up to take back the Majority.

The NRCC reported their fundraising numbers Thursday, showing they raised $33.7 million in the first three months of the year, as they gear up to take back the majority.

The committee’s press release highlighted that the $29.7 million they have cash on hand is a 57 percent increase over the same point last cycle.

This includes their March numbers as well, where they hauled in $19.1 million, which is $3.6 million more than their previous off-year record for March.

The NRCC’s Democrat counterpart, the Democratic Congressional Campaign Committee (DCCC), has yet to release its fundraising numbers. Still, the NRCC pointed that they have no debt, while the DCCC entered into March with $11 million in debt.

In March, the NRCC introduced an “Exit List” that highlights the Democrats who are “likely to retire or run for a different office in 2022.” This includes a previously released list from February, which listed 47 “offensive opportunities,” including 29 Battleground Districts. These are districts are where “President Biden lost the district or where the 2020 presidential or congressional margin was within 5 percent.”

In addition to a survey finding Pelosi’s agenda helps Republicans in the polls, House Republicans seem to be “in good shape” to win the majority in 2022.

In February, the poll showed that when Pelosi pushes her partisan, socialist agenda, the Republican’s advantage grows in the ticket-splitting districts. Pelosi’s poll numbers were down 20 percent, showing her at a 58 percent unfavorable rating. Out of the unfavorable, over half (51 percent) find her very unfavorable.