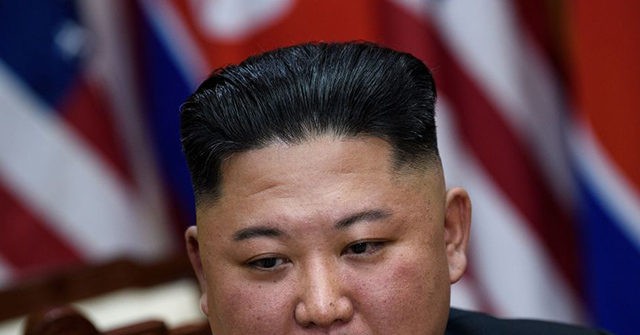 The term “Arduous March” holds ominous significance for North Koreans, as it refers to a period of mass starvation in the 1990s after the collapse of the Soviet Union.

According to some estimates, millions of North Koreans died during the original Arduous March famine — the exact number is difficult to discern, given the paranoid Communist regime’s penchant for secrecy and lies — so Kim’s comments were on par with telling his subjects to prepare for a new Black Plague or Great Leap Forward.

“I made up my mind to ask the WPK organizations at all levels, including its Central Committee, and the cell secretaries of the entire party to wage another more difficult ‘Arduous March’ in order to relieve our people of the difficulty,” Kim was quoted as saying in the official Korean Central News Agency.

“Our Party never expects that there will be any fortuitous opportunity for us in paving the road for our people and in realizing their great aim and ideals to build socialism and communism. There is nothing we could depend on or look to,” he said.

He then laid out 10 major tasks for the party cells, urging the cell secretaries to patiently educate and train their members into “fighters boundlessly faithful” to the party.

“Just as mothers always concern themselves with the life and growth of their children and guide them along the right path, party cell secretaries should patiently educate and lead party members with warm affection and devotion,” he said.

South Korean Unification Ministry spokesman Cha Deok-Cheol speculated that Kim referenced the 90s famine to “encourage efforts to achieve the tasks put forward” by recent meetings of the WPK, while Yonhap suspected his goal was “intensifying discipline among party officials as the North suffers from economic challenges amid prolonged sanctions.”

Along the latter lines, Kim demanded more “ideological education” for North Korean children, who already receive a great deal of such indoctrination and a more intensive purge of “anti-socialist and non-socialist practices.”

Kim said last week that North Korea faces its “worst-ever situation,” a bold statement in light of that horrendous famine decades ago.

Among North Korea’s many problems is the regime’s stubborn insistence that it has encountered exactly zero cases of coronavirus, even as lockdown measures visibly tightened and North Korea’s all-important trade with China virtually ceased. The North Korean government informed the World Health Organization (W.H.O.) on April First that it performed over 23,000 coronavirus tests, and every single one of the results was negative.

North Korea’s already weak economy slipped by over ten percent last year, while its trade with China shrank by about 80 percent, all because of a disease Pyongyang claims it doesn’t have a single case of.

The UK Guardian cited theories that Kim’s reference to the Arduous March famine was a way of signaling China that he expects Beijing to feed his people, or else suffer the consequences of North Korean refugees streaming across the Chinese border. Chinese President Xi Jinping made comments last month that could be construed as a promise to help Kim avert mass starvation so North Korea can continue pretending it is the only country that went completely untouched by the Wuhan coronavirus.

Former U.S. government analyst Rachel Lee told the Financial Times on Friday that Kim’s remarks were meant as a signal that his regime has no intention of asking the United States for assistance, relenting on his nuclear weapons program, or striking a deal to gain relief from sanctions.

“Internally, Kim is telling the people to brace yourselves for a long period of economic difficulties and hard work to improve the economy, similar to the ‘Arduous March’ in the 1990s,” said Lee. “Externally, he is sending the message that he will not lower the bar for negotiations with the US just to have the sanctions removed, that he views improvement of U.S.-North Korea relations as a long-term issue and he will be braced for it accordingly.”

Lee’s theory could have a Chinese angle as well, since China is very determined to counter and delegitimize the use of sanctions to control rogue nations or enforce Western notions of human rights. Kim has every reason to believe Beijing will help him prop up his faltering economy and resist ongoing U.S. sanctions pressure.