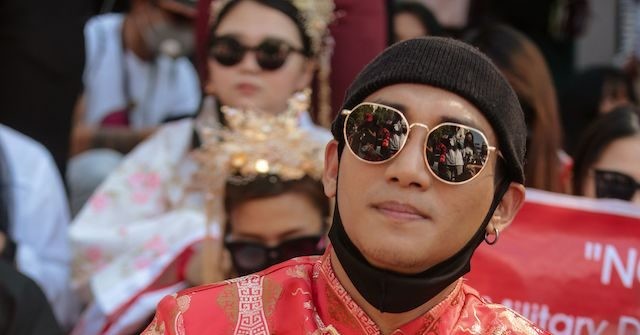 The military junta in Myanmar on Thursday arrested 24-year-old model and actor Paing Takhon, hailed as “the most handsome person in Southeast Asia” by fans, because he criticized the coup.

Two days earlier, Myanmar’s most famous comedian was arrested for similar reasons, joining dozens of celebrities languishing in jail because the junta is desperate to deprive the protest movement of star power.

Takhon was taken into custody by eight truckloads of police and soldiers at his home in Yangon, Myanmar’s largest city. His sister asked supporters to pray for him, as he said he was in poor health before he was arrested.

“As he’s seriously ill, they arrested him calmly without violence. We do not know where he’s taken,” Takhon’s sister Thi Thi Lwin wrote on Facebook.

In one of the pictures below, Takhon is making the three-fingered salute of defiance against tyranny from the Hunger Games books and movies, a gesture popular with protesters in Myanmar:

Actor and model Paing Takhon was arrested this morning. He has been actively speaking out against the military coup since early February. The junta is now arresting medics, engineers, students, workers, and finally actors. #WhatsHappeningInMyanmar pic.twitter.com/fPXj2Pp3T0

Another actor, May Toe Khine, demanded freedom for Takhon, the popular comedian Zarganar (real name Maung Thura) who was arrested a few days previously, and numerous other entertainers who have been taken into custody.

A total of 120 celebrities have been arrested or placed on a wanted list by the military. State media has published even longer lists of entertainers and social media influencers charged with “spreading news to affect state stability.” All Burmese media outlets have been ordered not to broadcast content featuring the blacklisted celebrities, from songs to movies and TV shows.

“The military wants people to love them, to be afraid of them, to respect them, so it will make arrests, torture, or kill the artists, but most of us will be ready to fight against the evil,” a blacklisted poet told Radio Free Asia (RFA).

International beauty pageant contestant Han Lay told RFA she was afraid to return to Myanmar after competing at a pageant in Thailand, since she spoke out against the coup while she was there.

“If singers and celebrities can get arrested just for writing posts on social media, how can a person like me, who has come to Thailand to represent the country at a pageant and talk to the international media like this, be safe?” she said.

Takhon is regarded as the most famous and influential of the jailed dissidents to date. He represents several local brands, has a television career in Thailand, and has served as a cultural ambassador for Myanmar. Comedian Zarganar, who is 60 years old, has the distinction of getting arrested by both the current and previous military regimes.

KNOWLES: With Republicans Like Liz Cheney And Mitt Romney, Who Needs...

KNOWLES: With Republicans Like Liz Cheney And Mitt Romney, Who Needs...