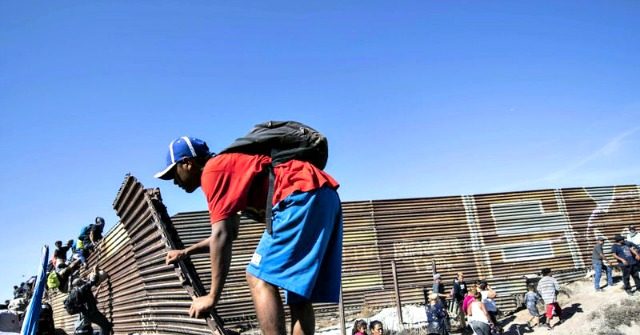 Most are repeat border crossers who were previously returned to Mexico thanks to the Center for Disease Control’s (CDC) Title 42 order, which allows federal immigration officials to quickly return border crossers to their native countries for the sake of American public health.

A provision of Title 42, though, removes traditional penalties for re-entries, such as felony charges and jail time, allowing border crossers to make as many attempts as it takes to get into the U.S. As a result, some Mexican adults have lost count of how many times they tried to illegally enter the U.S

Nearly everyone interviewed by the San Diego Union-Tribune shortly after being expelled to Tijuana said that they had tried crossing the border three or more times in recent weeks in hopes of getting in.

One man, who declined to be identified, said he’d lost count of how many times he tried. He tossed out a guess — 30.

To deal with the border crisis, President Joe Biden’s administration has primarily focused on addressing the supposed “root causes of migration” to the U.S. from Central America’s Northern Triangle (NT) region, including Guatemala, El Salvador, and Honduras.

However, a Breitbart News analysis of federal government data found border authorities encountered more border crossers from the rising number of countries outside the NT area, mainly Mexicans, than from inside the NT area each month between January and May.

For instance, in May, the number of Mexican border crossers alone exceeded those from Guatemala, El Salvador, and Honduras combined.

Since April 2020, the number of monthly apprehensions by Border Patrol has increased to a peak not seen since the spring of 2000. And despite the focused attention on unaccompanied children and families from Central America, the largest demographic group driving that increase is adults from Mexico traveling alone.

This month, the Washington Post reported illegal immigration from the NT area is dropping and being offset by migrants from outside the region, including Mexico and a growing number of nations beyond that country and Central America.

“I think Title 42 lends itself to a higher recidivism rate,” Miller testified in May.

That same month, Department of Homeland Security (DHS) Secretary Alejandro Mayorkas told the Senate Homeland Security Committee that he was considering changing his no-penalty policy for border crossers who make repeated runs at the border.

“There is recidivism when an individual is expelled under Title 42, a single adult, we have seen that same individual return, only to be expelled again, and that’s one of the things that we’re looking at in terms of a consequence regime,” he testified.

According to the Union-Tribune, the recidivism rate has more than tripled since former President Trump first implemented Title 42 in March 2020 to stem the spread of the Chinese coronavirus.

As Breitbart News reported, Biden reportedly may end Title 42 by the end of July 18, a move that Republican lawmakers and experts have said will drive an unprecedented wave of illegal immigration.