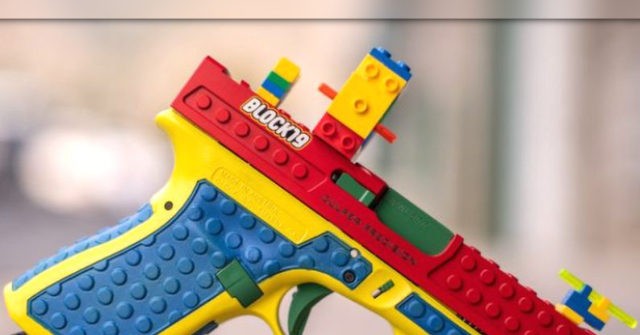 The kids toy giant Lego is demanding Utah’s Culper Precision cease producing handguns that look as if they were made from Lego toys.

Culper Precision noted that it came up with the idea of the gun as part of an effort to “highlight the pure enjoyment of the shooting sports.”

But the Danish company Lego demanded Culper Precision cease making the pistols, as they are “covered in what looks like Lego bricks.”

This “Lego Glock” is an actual thing you can buy, build and shoot: “…honestly what childhood toy is more welcoming than a big ole pile of blocks:” https://t.co/wBXl5GP6an

Unintentional shootings among children have risen by 30% in the past year. pic.twitter.com/ZmQXiefOE7

The Daily Beast noted that Culper Precision removed the Block 19 from their website on Tuesday.

Culper Precision made sure to point out that the Block 19 had only been available to buyers who could legally buy a gun.

The push to stop production of a gun that was only sold to those who could legally buy it comes as law-abiding citizens are seeking ways to defend themselves from the crime surge that followed the “defund the police” movement and Democrat-sponsored gun control.

During his Sunday CPAC speech Donald Trump pointed out the left’s effort to disarm law-abiding Americans: “The same far-left Democrats who are defunding police are also leading an all-out crusade to strip you, the law-abiding citizens of America, of your God-given Second Amendment rights.”