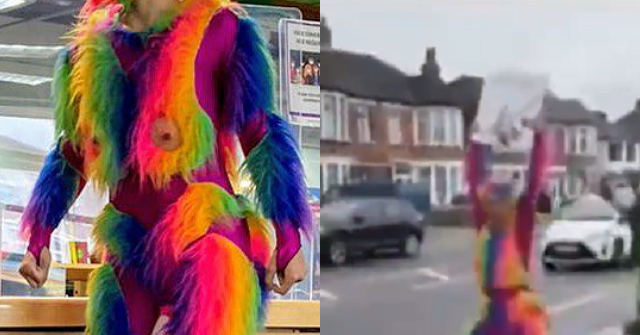 On Sunday, Breitbart London was the first news outlet to reveal that the Labour-run Redbridge Council in London hosted a carnival troupe featuring a performer dressed as a naked rainbow monkey with a giant phallus dangling betwixt his legs during Redbridge Libraries’ Summer Reading Challenge for children.

The event, which has since sparked international outrage, particularly angered local Muslim parents and school leaders, ultimately forcing the multicultural Labour Party to backtrack somewhat on its radical LGBT agenda.

One parent said per the Evening Standard: “Someone needs to lose their job over this.”

Another asked: “This is unbelievable. Have we completely lost our moral compass as a society?”

Local school governor Has Ahmed said: “Apparently this is meant to encourage kids in Redbridge to pick up reading for summer.

“Please tell me the rationale behind these indecent costumes that were shown to families and done so publicly. Is this really necessary?”

A protest from a local Islamic parents association, Parents United, has been scheduled outside the Ilford Town Hall on Tuesday night in order to “raise the child safeguarding concerns in Redbridge”.

Amid the intense backlash, the local Labour Party council leader in Redbridge Jas Athwal said: “I was appalled by the event our independent leisure contractor organised at Redbridge Libraries on Saturday.

“I have launched a full investigation into the incident and will put stringent measures in place to ensure something like this can’t happen again.”

The self-described anti-racist performance artist group Mandinga issued an apology: “We apologise for the offence caused while raising awareness of the reading campaign by Redbridge Libraries on 10 July. We never intended to offend residents.

“We respect everyone’s individual opinion with no offence to any part. Actions are being taken, more information to follow.”

The YouTube account for Redbridge Libraries has also been made private after it was revealed to have hosted ‘Drag Queen Story Hour’ videos by Mama G, a drag queen performer who has been criticised for teaching young children in England how to twerk.

This is a slight change of tone pic.twitter.com/zAFU5AswiM

Speaking to Breitbart London, Bow Group chairman Ben Harris-Quinney said: “The Bow Group has been exposing and opposing Cultural Marxism for over a decade, and it is this root ideology that has birthed the woke movement, the LGBT lobby, BLM.

“The design of Cultural Marxism is to destroy Judeo-Christian civilisation, it has been very successful so far, and just as successful in convincing people it doesn’t exist.”

The Bow Group chairman blamed both the opposition Labour Party and the ruling Conservative Party for allowing the Marxist rot to spread throughout Britain’s institutions.

“Unless someone gets into power soon that will fight the culture war and remorselessly reverse Cultural Marxism, our society will be overwhelmed by an ideology designed to destroy it,” Mr Harris-Quinney warned.