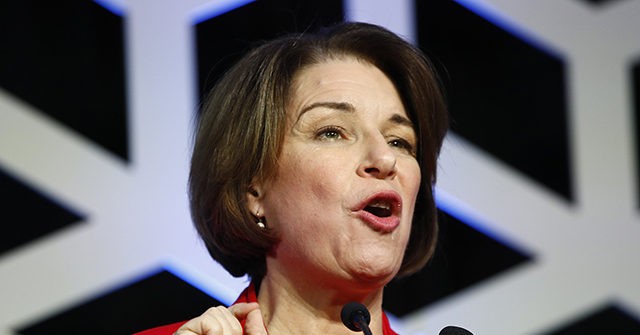 Senator Amy Klobuchar (D-MN) said Sunday on CNN’s “State of the Union” that so-called “voting rights” could be included in the Democrats’ more expansive infrastructure package they were planning to pass with a simple majority vote using the reconciliation process.

Klobuchar said, “We’ve seen a concerted effort across the country, you know this, Dana, over 400 bills introduced, 28 signed into law, including this really bad one in Georgia, that not only denies voters water when they’re standing in line but also reduces the run-off time to 28 days. And guess what? You have to register 29 days before.”

She continued, “This is clearly a focus by the Republicans in Georgia on limiting people from voting. So we’re doing this hearing, yes, to build pressure, to pass basic federal voting rights. That is the For the People Act and the John Lewis Bill. You name it. If we were just to concede and say, okay, we have one vote, the Republicans blocked it, so we’re taking our marbles and going home. That’s not fair to the people of Georgia. That’s sure not fair to the people of Texas. we’re not giving up.”

Klobuchar added, “There are many ways to proceed here, including the upcoming infrastructure packages that were just discussed with Senator Portman. I’m happy to answer. I think we need a deadline that Senator Schumer set. We need to get going. Election infrastructure could be in the Democratic package. And that’s part of the solution. The House is starting their hearings this fall on the John Lewis Act. We are moving on that bill.”

Anchor Dana Bash said, “Senator, I want to follow up on something you just said. One way to pass the legislation you’re talking about, voting rights legislation, with only 51 votes, is through a process known as reconciliation. And Whip Jim Clyburn has been floating the idea to pass voting rights that way. Are you saying you think Senate rules would allow you to pass at least some of the voting rights proposals and provisions through reconciliation?”

Bash said, “But if you can’t get that done?”

Klobuchar said, “If you can’t, what you can do with infrastructure, not in the bipartisan package, and I’m glad they’re continuing to negotiate and make progress. What you can do is put election infrastructure in there. You could tie it to certain things as incentives for states to do same-day registration, to do the mail-in balloting. It is no substitute for putting the basic federal rights in place. What I’m saying is that you have to do all of these things at once.”