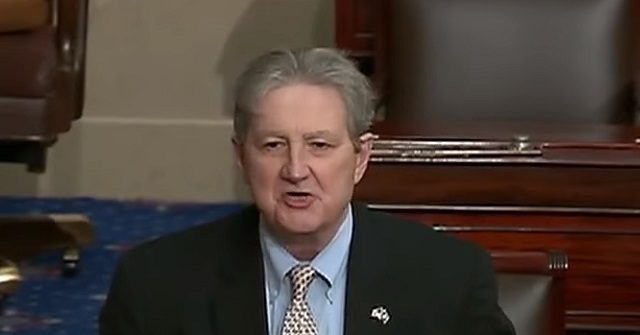 Wednesday on Fox News Channel’s “The Faulkner Focus,” Sen. John Kennedy (R-LA) weighed in on the protests in Cuba.

“What’s happening in Cuba is a contradiction for me,” Kennedy stated. “It is both beautiful, but it also disgusts me to my core. It is beautiful because what we’re seeing is people’s innate thirst for freedom. I mean, our desire for freedom is deeply seeded. It is almost part of the human condition. And the Cuban people want their freedom. When Castro took over, he promised them freedom. Instead, he gave them socialism, which we now know, of course, is just trickle-down poverty. So, that part is beautiful, and I think we ought to do everything we can to support the good people of Cuba.”

“What I find disgusting is the fact that all President Biden has done is issue a press release. That’s it,” he continued. “I don’t even know if he even read the thing. President Biden needs to be on the telephone. He needs to be calling the leaders of the U.K., of Canada, of New Zealand, of Australia, of India, of Japan, of South Korea, of the European Union and say let’s issue a joint statement supporting the people of Cuba and let’s talk about additional sanctions on the Castro government. We’ve got the Castro government now. The people have, let’s choke them to death. President Biden ought to be using all of the cyber skills that exist in the United States of America to keep that internet open in Cuba so the whole world can watch and the Cuban people can talk to each other and try to reinforce their actions.”

‘Below Deck Med’: Is Lexi Wilson Engaged? This Is What Malia...

‘Below Deck Med’: Is Lexi Wilson Engaged? This Is What Malia...