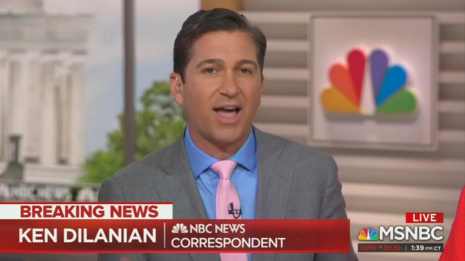 Matthew Foldi at the Washington Free Beacon reported NBC News on Wednesday retracted an article by intelligence reporter Ken Dilanian, telling readers that it “fell short of our reporting standards. In order to warrant publication, it needed on-the-record quotes from critics, rather than anonymous ones.”

That’s fascinating, since anonymous sources were appropriate for Dilanian’s stories on Trump scandals.

This latest story focused on more than $550,000 in donations to the American Israeli Political Action Committee (AIPAC) from a family foundation linked to Anne Neuberger, whom Biden appointed as deputy national security adviser for cyber and emerging technology.

“The story is accurate and was published by NBC News after our normal editing and vetting process, which includes review by our legal and standards departments,” Dilanian told the Free Beacon in an email. He noted the donations were first reported by David Corn of the leftist magazine Mother Jones.

It came under fire for implying that donations to the pro-Israel group raised questions about Neuberger’s loyalty to the United States, a longstanding trope of anti-Semites. Dilanian’s anonymous critics argued that the donations in favor of Israel are almost disqualifying and would raise eyebrows about conflicts of interest. AIPAC tweeted a demand for retraction:

NBC also admitted it wasn’t fair and balanced enough: “The article should have also included more views from those who believe that donations to AIPAC do not represent a conflict. And it did not give Neuberger adequate time to respond to our reporting.” In the Biden era, Dilanian’s editors seem to have grown much more sensitive to White House criticism. The piece remains online accompanied by a two-paragraph Editor’s Note detailing the shortcomings.

Two of the sources interviewed who know Neuberger say she is a person of high integrity. Nonetheless, installing a top cyber official in the White House who has strong ties to an organization that represents the interests of the Israeli government could cause some people to question the impartiality of the policy process, they said.

“If you donate half a million dollars to a lobbying group, that indicates a pretty strong preference,” said one senior Congressional aide who oversees national security issues.

“One question this presents is whether she would recuse herself from decisions that could impact Israel,” said a foreign policy expert with close ties to the Biden team.

The donations “would raise a lot of eyebrows within the government and beyond,” one former senior intelligence official said, “especially since the two dimensions involved — Israel and cyber — have their own history.”

A second former senior intelligence official added, “Is this disqualifying? Probably not. But it’s not good.”

One current intelligence official and one congressional aide disagreed, saying the donations alone are not problematic because AIPAC is a mainstream organization and Israel is an ally.

Walmart donates $14 million as part of broader pledge to advance...

Chicago mayor orders teachers to be in the classroom this week