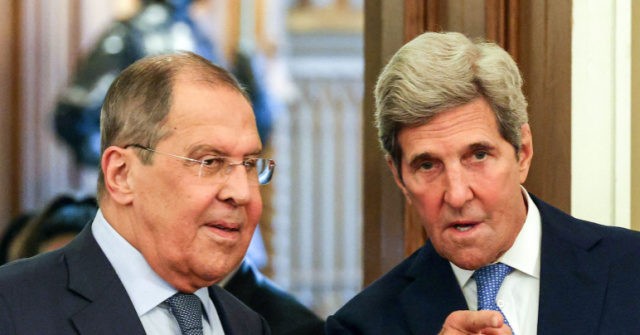 The Office of the Director of National Intelligence Annual Threat Assessment (April 9, 2021) reports that Russia is an ongoing threat to the United States, but the Biden administration is sending John Kerry to Moscow to talk about climate change nonetheless.

Kerry, whom President Biden dubs the “special presidential envoy on climate,” will talk to his counterparts about so-called manmade climate change and seek cooperation from an enemy to save the planet.

This development follows Biden’s shutting down the Keystone XL pipeline and halting energy production on public lands while waiving sanctions against Russian to allow construction of a pipeline to export oil to Germany.

The Office of the Director of National Intelligence states, in part:

Moscow will continue to employ a variety of tactics this year meant to undermine US influence, develop new international norms and partnerships, divide Western countries and weaken Western alliances, and demonstrate Russia’s ability to shape global events as a major player in a new multipolar international order. Russia will continue to develop its military, nuclear, space, cyber, and intelligence capabilities, while actively engaging abroad and leveraging its energy resources, to advance its agenda and undermine the United States.

“As the president made clear to President Putin when they met, if the Russian government cannot or will not take action against criminal actors residing in Russia, we will take action or reserve the right to take action on our own,” White House press secretary Jen Psaki said at a news briefing on Tuesday.

Russia also participated remotely in a White House climate summit in April where Biden said he was “heartened” to hear Putin wanted to work with other countries on removing carbon dioxide from the atmosphere, according to the Hill.

But Putin’s government has set only unambitious goals for cutting emissions as the waste from burning fossil fuels heats up the planet.

Kerry, former Secretary of State in the Obama administration, is encouraging other governments to commit to tough targets to cut emissions ahead of a U.N. global climate summit later this year.

Although it’s Kerry’s first visit to Moscow in his new role, it will be his second time meeting Lavrov this year. The two had a brief meeting in New Delhi in April, reportedly after they realized they were staying in the same hotel.

Today’s meeting brings together two of the world’s top five oil exporters and two of the four largest carbon emitters. And although Biden is struggling to put forward climate change legislation that will pass a fossil fuel-friendly Senate, similar domestic concerns may prevent Russia from taking serious climate action.

Hopes of a Russian transformation on climate change may be hobbled by Moscow’s wider ambitions. Its new national security strategy, signed by Putin on July 2, acknowledges climate change as an avenue for international cooperation but warns against foreign countries using the issue to create “leverage to exert open political and economic pressure on Russia” as well as preventing its development in the Arctic, where melting ice provides oil and gas as well as shipping opportunities.

Kerry will be the highest-ranking Biden official yet to visit the country, according to the U.S. State Department.