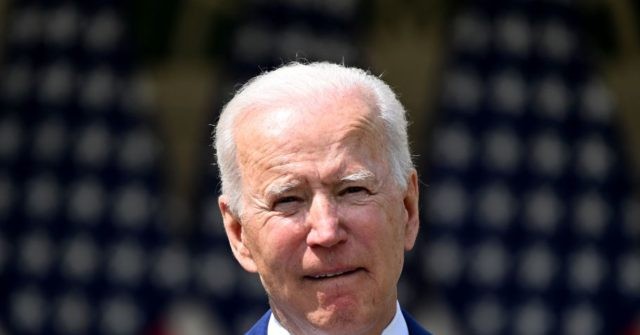 President Joe Biden and First Lady Jill Biden issued a tardy statement of condolences to the United Kingdom in response to the death of Prince Philip on Friday.

The news of The Duke of Edinburgh’s death broke early Friday morning but it took more than four hours for the Biden White House to issue a statement to the United Kingdom, frequently described by leaders of both countries as one of America’s closest allies.

Former President George W. Bush did not wait for Biden before sending his own condolences after the news, and House Speaker Nancy Pelosi released a statement hours before Biden’s statement was released.

Statement by President Bush on the passing of Prince Philip pic.twitter.com/iJpnTOWvrp

The US Congress extends condolences over the passing of Prince Philip, whose life was distinguished by an inspiring ethic of dedicated service. May it be a comfort to Her Majesty & the Royal family that so many mourn with & pray for them at this sad time.

The delay from the Bidens prompted some criticism from Nigel Farage, the author of Britain’s withdrawal from the European Union, and former leader of both the UK Independence Party (UKIP) and the Brexit Party.

“As global leaders offer the Queen condolences on the death of Prince Philip, there is not a word from the US President or his Vice,” Farage wrote on social media at 10:25 a.m. “This despite US media full of the story. Biden and the Democrats do not like the UK.”

As global leaders offer the Queen condolences on the death of Prince Philip, there is not a word from the US President or his Vice.

This despite US media full of the story. Biden and the Democrats do not like the UK.

The statement from the Bidens was released at 11:10 a.m., about 15 minutes after Breitbart News inquired about the timing for the Biden family’s expression of condolences.

On behalf of all the people of the United States, we send our deepest condolences to Her Majesty Queen Elizabeth II, the entire Royal Family, and all the people of the United Kingdom on the death of His Royal Highness Prince Philip, the Duke of Edinburgh. Over the course of his 99-year life, he saw our world change dramatically and repeatedly. From his service during World War II, to his 73 years alongside the Queen, and his entire life in the public eye — Prince Philip gladly dedicated himself to the people of the UK, the Commonwealth, and to his family. The impact of his decades of devoted public service is evident in the worthy causes he lifted up as patron, in the environmental efforts he championed, in the members of the Armed Forces that he supported, in the young people he inspired, and so much more. His legacy will live on not only through his family, but in all the charitable endeavors he shaped.

Jill and I are keeping the Queen and to Prince Philip’s children, grandchildren, and great-grandchildren in our hearts during this time.

First Lady Jill Biden’s spokesman Michael LaRosa spoke about the first lady’s relationship with the royal family during a trip to Alabama, noting that she had never met Prince Philip.

“She has a close relationship with Harry, and her heart is with him and the family today,” LaRosa said.

Vice President Kamala Harris has not issued a statement at the time of publication.