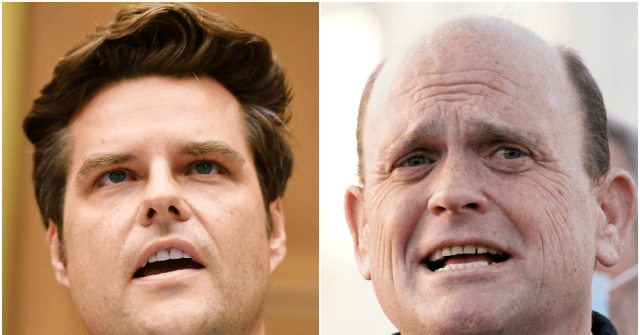 The House Committee on Ethics announced Friday they opened an investigation on two Republican Representatives, Rep. Matt Gaetz (R-FL) and Rep. Tom Reed (R-NY). This comes as both Republicans recently were accused of sexual misconduct.

The letter opening Gaetz’s investigation stated the Committee had been made aware of public allegations surrounding Gaetz. The letter lays out that Gaetz is under investigation for:

…sexual misconduct and/or illicit drug use, shared inappropriate images or videos on the House floor, misused state identification records, converted campaign funds to personal use, and/or accepted a bribe, improper gratuity, or impermissible gift. These are all to be a “violation of the House Rules, laws, or other standards of conduct.

The Committee also noted that “the mere fact that it is investigating these allegations, and publicly disclosing its review, does not itself indicate that any violation has occurred, or reflect any judgment on behalf of the Committee.”

This investigation comes as the New York Times first reported the Congressman being investigated by the Department of Justice (DOJ), allegedly for being involved in an inappropriate relationship with a 17-year-old girl. The Daily Beast recently reported Gaetz has connected with Joel Greenberg through Venmo. Greenberg has been federally indicted on 33 counts, including sex trafficking crimes.

Last week, Gaetz reportedly said he has no plans to resign after the Hill originally reported the Department of Justice is investigating him due to allegations regarding an inappropriate relationship with a minor and a violation of sex trafficking laws.

Reed’s letter also notes that “the mere fact that it is investigating these allegations, and publicly disclosing its review, does not itself indicate that any violation has occurred, or reflect any judgment on behalf of the Committee.”

The Washington Post originally reported the allegations of Nicolette Davis, who was a lobbyist for the insurer Aflac at the time. Davis said Reed was “seated next to her at a Minneapolis bar, unhooked her bra from outside her blouse and moved his hand to her thigh.”

Last month, Reed released a statement regarding the allegations, saying he apologized to Davis, the lobbyist who accused him of inappropriate behavior. “I hear her voice and will not dismiss her. In reflection, my personal depiction of this event is irrelevant,” Reed wrote, taking full responsibility.