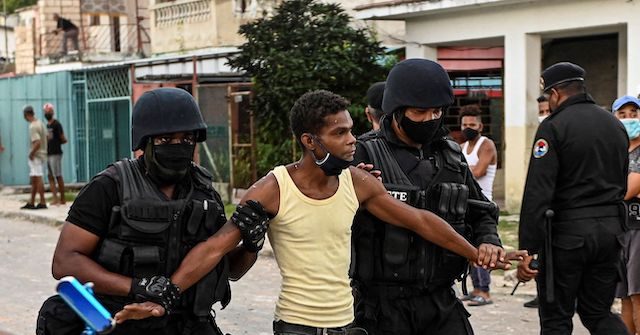 As thousands of Cubans protest against the island’s communist regime, stringent gun control laws from Havana negatively impact their efforts.

Whereas in the United States, it is common parlance to say the gun rights enumerated in the Second Amendment protect the all the other rights outlined in the Bill of Rights, in Cuba the people are not allowed any claim to a natural right to keep and bear arms. This creates a disadvantage as Cubans fight for freedom.

The University of Syndey’s GunPolicy.org highlights the “restrictive” gun control measures in Cuba. Those controls include a ban on large swathes of firearms and require those who want to own legal guns the regime recognizes as legal to first acquire a license. The process for getting a license includes “[establishing] a genuine reason to possess a firearm.” Cubans who are able to get a license “must re-apply and re-qualify for their firearm license every ten years.”

The would-be firearm owner also has to go through a background check “which considers criminal, mental health, health, and addiction records.” The overall process for purchasing a gun is not set in stone, as GunPolicy.org notes. “The minimum wait for a lawful firearm purchase to be completed is undetermined.”

All purchased firearms must be registered, all private sales are prohibited by law, and “the right to private gun ownership is not guaranteed by law.”

On July 6, 2014, Breitbart News reported that U.S. Founding Father James Madison held that America was exceptional because its citizens were armed.

Madison used Federal 46 to contend that one of the strongest checks on federal tyranny — if not the single strongest check — was an armed citizenry. He boiled down differences between Americans and their European counterparts by explaining that Americans could unite to stop a federal government intent on using military force to topple state power. Disarmed Europeans had no such option.

He succinctly described this as “the advantage of being armed, which the Americans possess over the people of almost every other nation.”

The Second Amendment guarantees the people retain this ultimate check on government via the right to keep and bear arms.

In Cuba, protesters are gathering together to fight for freedom without the benefit of a guarantee on the right to be armed.