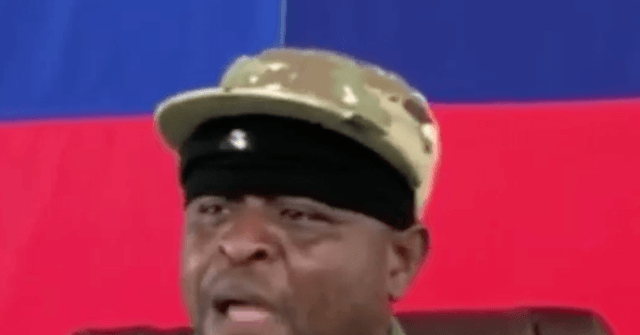 A former police officer turned one of Haiti’s most powerful gang bosses, Jimmy “Barbecue” Cherizier, accused an “international conspiracy against the Haitian people” this weekend of resulting in the assassination of President Jovenel Moïse in his home last week.

Moïse’s dramatic demise – in which he suffered a reported 12 gunshot wounds and his wife, first lady Martine Moïse, endured serious injuries, but none of his security guards were injured – occurred in the early morning hours of last Wednesday. Police have arrested over two dozen people implicated in the killing, the vast majority of them Colombian nationals who had recently arrived in the Caribbean nation. At least two of the arrested are believed to be Haitian-American, and authorities implicated a third person, a Haitian doctor based in Miami, over the weekend as one of several conspirators who planned the attack.

Moïse’s death intensified an already chaotic situation in the country, which currently lacks a parliament but has two prime ministers. Prior to Moïse’s death, it also had two presidents, but Moïse rival Joseph Mécène Jean-Louis has not made any public appearances since a video posted to social media in February in which he declared himself president.

Cherizier is the head of a group called “G9 Families and Allies,” a coalition of nine gangs that have increasingly amassed weapons and, thus, political power, in Haiti. Experts believe Cherizier had some form of relationship with the Moïse government as he has vocally condemned the killing and ordered his foot soldiers to enact revenge through “legitimate violence.”

In a video published on Saturday, Cherizier blamed a national elite tied to foreign special interests for organizing the killing.

“It was a national and international conspiracy against the Haitian people,” he said, according to a translation by Reuters, linking the Colombian alleged mercenaries to “business magnates of Syrian and Lebanese descent,” the newswire service claimed. Reuters identified those Middle Eastern interests as the group that Cherizier identified in the video as the “masters of the system.” He referred to Moïse’s assassination as “cowardly and villainous” and described the call to arms he was proposing as a national vengeance against enemies of the people.

“We tell all bases to mobilize, to mobilize and take to the streets for light to be shed on the president’s assassination,” Cherizier said. “It’s time for Black people with kinky hair like us to own supermarkets, to have car dealerships and own banks.”

Neither Haitian police nor any other actors investigating the assassination – a list that now includes the government of Colombia – have made any indication that Lebanese or Syrian businessmen were in any way involved in the incident. Reuters did note that the Miami Herald tied some of the Colombians arrested to “Miami-based company CTU Security, run by Venezuelan emigre Antonio Enmanuel Intriago Valera,” who allegedly worked as a police officer in Venezuela. The socialist regime ruling Venezuela is a close ally of the regime of Syrian dictator Bashar al-Assad and has close ties to the Iranian regime and its terrorist proxy Hezbollah, based in Lebanon.

Moïse had no overt conflicts with Venezuela, however – on the contrary, the former president was implicated in one of the largest corruption scandals in the modern history of Haiti involving Petrocaribe, an oil-for-influence program socialist Venezuela has used to bring many small Caribbean nations into its orbit.

Moïse’s administration did antagonize Venezuela’s most powerful ally: the Chinese Communist Party. Under Moïse, Haiti firmly maintained its diplomatic ties with Taiwan – a sovereign state the Chinese communists insist is a Chinese province – preventing Beijing from expanding its influence into the Caribbean country. Moïse appointed a new ambassador to Taiwan shortly before his assassination.

“Cherizier is now one of Haiti’s most influential gang leaders and leads an alliance of nine Haitian gangs known as the ‘G9 alliance.’ Throughout 2018 and 2019, Cherizier led armed groups in coordinated, brutal attacks in Port-au-Prince neighborhoods,” the U.S. government said at the time. “Most recently, in May 2020, Cherizier led armed gangs in a five-day attack in multiple Port-au-Prince neighborhoods in which civilians were killed and houses were set on fire.”

In late June, shortly before Moïse’s assassination, Cherizier had declared war on the country’s elite in another video missive, urging civilians to loot major businesses and banks. In that video, Reuters reported Cherizier appeared alongside “gang members wielding machetes and guns.”

“It is your money which is in banks, stores, supermarkets, and dealerships, so go and get what is rightfully yours,” he urged at the time.

The Associated Press noted on Sunday that, despite suspicions of an alliance with the ruling Moïse government, Cherizier had previously condemned corruption and collusion between powerful political elites and armed gangs in the country.

“They reign supreme everywhere, distribute weapons to the populous quarters, playing the division card to establish their domination,” Cherizier complained of the unnamed “exploiter” oligarchs.