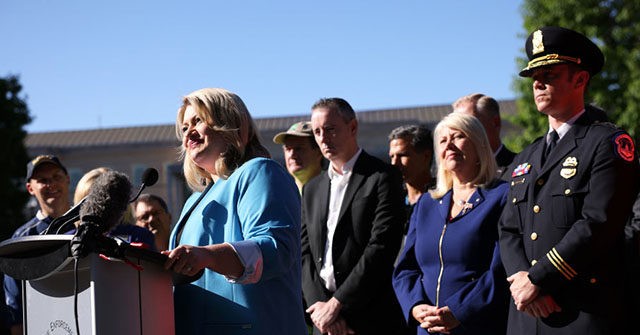 Cammack, who has been touring the border this week, described the ongoing crisis as the “most expensive … welcome to America party that we have ever seen.” She added that enough fentanyl to kill the entire state of Florida “nine times over” has been seized at the border.

“Up until about 3 a.m. this morning, I was in Roma, which is one of the new hot spots that is experiencing an incredible surge. And let me tell you, this is the most expensive welcome to America party that we have ever seen,” Cammack told host Maria Bartiromo. “You have National Guard, you have Border Patrol, you have Texas DPS all standing on the banks along with myself and six of my sheriffs from my state, and we are watching as coyotes, some of whom are Americans, are literally bringing people over on rafts. Just last night, we saw over 200 that were coming over — as young as two months old. It is staggering.”

She continued, “I quite literally am at a loss for words, for what I saw just in the last six hours as a representative. But as you said, these are people who want to be apprehended. This million apprehensions, it’s a staggering number, but these are people who want to be processed and released into the United States: your violent criminals, your sex offenders, your gang members, your terrorists, because we know there are people on the terrorist watch list coming over from 140 different countries. Those people are either a mile north or south on the river. And that is the concern.”

“This is a crisis of epic proportions,” Cammack added. “And it is just heartbreaking the children who are being trafficked as pawns in the middle of it.”