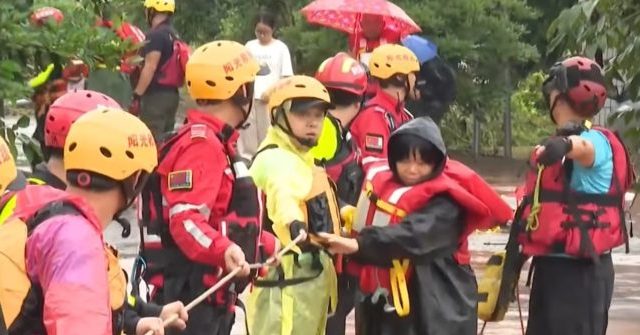 “In the city of Dazhou in the north of the province, the authorities relocated more than 4,600 residents due to floods and landslides and activated the highest alert level for more rain,” according to the news agency.

China’s Yellow River flows across north-central China, snaking into northern Sichuan province. The major waterway “is now at a ‘critical’ period of flood control with parts of its basin likely to see total rainfall 20 percent to 50 percent higher than average,” China’s Ministry of Water Resources said in a statement issued July 11.

“The flood control system [in the Yellow River Basin] is not yet complete, the dams have weak links, preventing floods on small and medium-sized rivers is difficult, and [local Chinese Communist Party] cadres and the public lack actual flood-fighting experience,” the ministry’s statement read.

“The two main roads from Bazhong to Tongjiang county [in Sichuan] were flooded on Sunday, damaging hundreds of houses, stores and markets,” the South China Morning Post reported.

“More rain was expected on Sunday [July 11] and Monday [July 12], and the Sichuan meteorological department warned that water levels on the Qu River might reach dangerous levels around Guangan,” according to the newspaper.

The Qu River is a tributary of the Jialing River in the Sichuan Basin. The Jialing River is in turn a tributary of Asia’s longest river, the Yangtze. China’s Yellow River is the second-longest river in China after the Yangtze. The flooding of China’s two longest rivers over the past week has affected not just Sichuan province, but regions across central and northern China, including the national capital, Beijing. Weather authorities in Beijing warned of “extreme rainstorms” from July 11 through July 12, according to Chinese state media.

“A landslide was recorded in one of the city’s northern districts, with state broadcaster CCTV [China Central Television] showing pictures of a road blocked by fallen rocks,” Agence France-Presse (AFP) relayed Sunday.

“Heavy rain was holding up efforts to clear the road,” CCTV reported on July 11.

Beijing weather officials said they predicted “as much as 100 millimetres [4 inches] of rain” throughout the day Sunday in some areas of the city. The capital’s two main airports canceled roughly 700 flights between them as of July 11 due to excessive rain, data from the Chinese aviation tracker VariFlight revealed.

“Floods are common during China’s rainy season, with higher water levels in August last year washing away roads and forcing tens of thousands from their homes,” AFP noted Sunday. “But the threat has worsened over the decades, due in part to widespread construction of dams and levees that have cut connections between the river and adjacent lakes and floodplains that had helped absorb the summer surge.”