MATAMOROS, Tamaulipas – Military forces arrested a female commander with the Gulf Cartel during a raid in the border city of Matamoros. The woman had a federal arrest warrant on organized crime charges.

The case took place this week, when troops from Mexico’s Navy carried out a raid in the Arboledas neighborhood, not far from Veterans International Bridge in Matamoros. The military troops

surprised Martha Alicia “La China” Perez Ferel, also known as Doña Martha, who was not able to fight back or escape. After the arrest, federal police officers moved Perez to an open field where a military helicopter landed and flew her to the airport in Matamoros. Her nickname, La China, is not to be confused with Melissa Calderon Ojeda, a jailed Sinaloa Cartel enforcer with the same nickname. 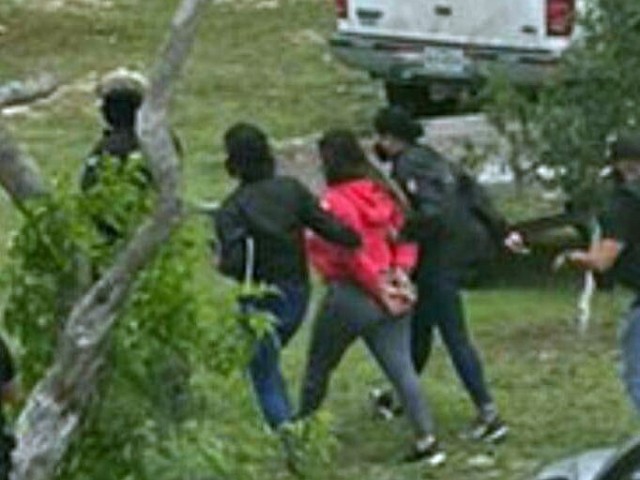 The operation caught locals by surprise leading to some seeking shelter expecting a gun battle at any moment. Other high-profile arrests in Matamoros led to shootouts.
According to information released by Mexico’s Attorney General’s Office (FGR), Perez has since been sent to a prison in the state of Guanajuato awaiting trial.

Mexican law enforcement sources consulted by Breitbart Texas revealed that Doña Martha has been a cell leader with the Gulf Cartel. Mexican authorities began hunting her in 2018 and in 2019 they came close to capturing her during a similar raid. She and her daughters managed to escape.

Editor’s Note: Breitbart Texas traveled to the Mexican States of Tamaulipas, Coahuila, and Nuevo León to recruit citizen journalists willing to risk their lives and expose the cartels silencing their communities.  The writers would face certain death at the hands of the various cartels that operate in those areas including the Gulf Cartel and Los Zetas if a pseudonym were not used. Breitbart Texas’ Cartel Chronicles are published in both English and in their original Spanish. This article was written by “J.A. Espinoza” and “J.C. Sanchez” from Tamaulipas.

Yet more bloodshed and bedlam in NYC — as voters turn...