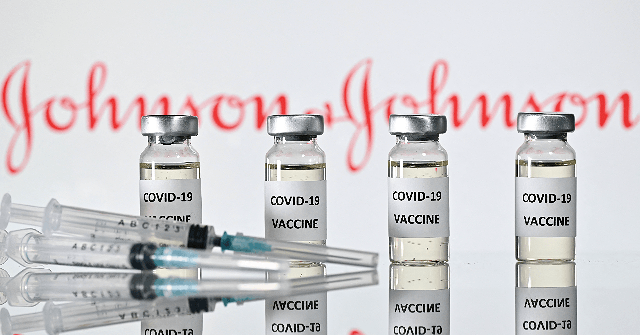 The Food and Drug Administration (FDA) on Monday added warning labels to Johnson & Johnson’s single-dose vaccine for the Chinese coronavirus over links to a rare neurological condition.

In an updated fact sheet for healthcare providers administering the J&J vaccine, the FDA provides a list of warnings of adverse side effects, including acute allergic reactions, thrombosis with thrombocytopenia, capillary leak syndrome, and now, Guillain-Barré Syndrome — a nervous system disorder.

“Reports of adverse events following use of the Janssen COVID-19 Vaccine under emergency use authorization suggest an increased risk of Guillain-Barré syndrome during the 42 days following vaccination,” the fact sheet reads.

According to officials, the FDA and Centers for Disease Control and Prevention (CDC) have reviewed reports of “about 100 people developing the syndrome after receiving the one-dose vaccine.”

“Almost all of were hospitalized and one person died, the FDA said,” according to the AP:

Guillain-Barre syndrome occurs when the body’s immune system mistakenly attacks some of its nerve cells, causing muscle weakness and sometimes paralysis that typically is temporary. An estimated 3,000 to 6,000 people develop the syndrome each year, according to the CDC.

According to the CDC, over 12 million of those “fully vaccinated” in the U.S. have received the J&J jab. The vast majority have received one of the two-dose mRNA shots — Pfizer or Moderna.

The report comes on the heels of reports of rare heart inflammation conditions — myocarditis or pericarditis —  developing primarily in young men after receiving one of the mRNA vaccines. However, the CDC has determined that the benefits of receiving the vaccine outweigh the risks.

Notably, none of the vaccines in the U.S. — neither J&J nor Pfizer nor Moderna — have been formally FDA approved, operating under Emergency Use Authorization (EUA).

Dr. Anthony Fauci, who brazenly branded himself the voice of science, said that is merely a “technical issue”

“It’s the FDA dotting the I’s and crossing the T’s,” he said during an appearance on ABC’s This Week. “But there’s no doubt in my mind that these vaccines are going to get full approval because of the extraordinary amount of positive data.”