The cartel turf war for control of the drug market in the Mexican border state of Nuevo Leon took a turn in recent days as an independent figure broke from his allies and is unilaterally fighting other groups plus the Gulf Cartel and the Cartel Del Noreste faction of Los Zetas.

Known in the criminal world as “Chino Norte,” Alfredo Azael Nava Ramirez is the leader of an independent gang holding turf in the northern Monterrey metropolitan area. El Chino was part of an alliance of dealers with common cause against the Cartel Del Noreste faction of Los Zetas. Parts of Monterrey have become lucrative for cartels due to the high drug demand by a growing, younger population.

This weekend, some of the independent groups previously allied with El Chino Norte announced their fracture in a series of banners accusing him of killing innocents and receiving protection from the elite Fuerza Civil Group of Nuevo Leon State Police. 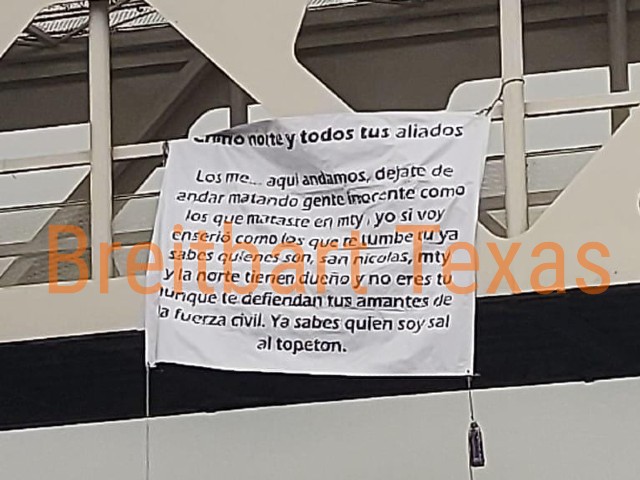 U.S. law enforcement sources operating in Mexico revealed to Breitbart Texas that El Chino Norte has a criminal history dating back to 2018 when he was a street-level drug dealer and went by the name “Chino San Berna.” After spending some time in the Apodaca State Prison, he changed his name to El Chino Norte. Through some questionable legal maneuvers by his attorneys, he was released from prison.

Gerald “Tony” Aranda is an international journalist with more than 20 years of experience working in high-risk areas for print and broadcast news outlets investigating organized crime, corruption, and drug trafficking in the U.S. and Mexico.  In 2016, Gerald took up the pseudonym of “Tony” when he joined Breitbart Texas’ Cartel Chronicles project. Since then, he has come out of the shadows and become a contributing writer for Breitbart Texas.