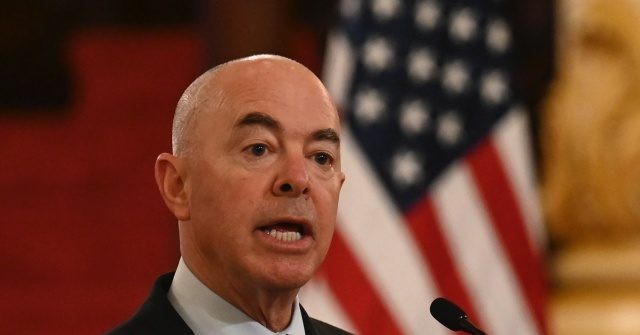 On Friday, Hanen ruled that the Obama administration had illegally implemented the DACA program to shield hundreds of thousands of illegal aliens from deportation. The program, Hanen ordered, must be effectively shut down to new, illegal alien applicants.

Mayorkas, nominated by Biden and approved by the Senate, said he is “disappointed” by DACA’s being ruled unconstitutional but that it must not prevent the administration from ramming through their plan to give amnesty to millions of illegal aliens.

“I am disappointed by yesterday’s ruling and its impact on families across the country, but it will not derail our efforts to protect Dreamers,” Mayorkas said in a statement:

The Biden-Harris Administration — and this country — remain as committed as ever to ensuring that Dreamers are protected from the threat of deportation and are allowed to continue to contribute to this country that is their home. DHS remains focused on safeguarding DACA, and we will engage the public in a rulemaking process to preserve and fortify DACA. [Emphasis added]

Mayorkas also said that Biden’s Department of Justice “intends to appeal” the DACA ruling but admitted that the administration must now rely on the little-known reconciliation maneuver whereby Senate Democrats could sneak an amnesty in a budget with no filibuster threat while only needing 51 votes to approve.

“Still, only the passage of legislation will give full protection and a path to citizenship to DACA recipients,” Mayorkas continued:

In January, President Biden offered a legislative proposal, and in March the House of Representatives passed the ‘American Dream and Promise Act.’ I urge Congress to act swiftly to enact legislation through the reconciliation process to provide permanent protection that the American people want and Dreamers have earned. [Emphasis added]

Should Democrats try to sneak an amnesty into a budget via reconciliation, it will be up to Senate Parliamentarian Elizabeth MacDonough to halt the plan on the grounds that the measure is not budget-related but actually alters federal immigration law. MacDonough previously stopped Democrats from increasing the federal minimum wage visa reconciliation.

Already, current immigration levels put downward pressure on U.S. wages while redistributing about $500 billion in wealth away from America’s working and middle class and towards employers and new arrivals, research by the National Academies of Sciences, Engineering and Medicine has found.

The Congressional Budget Office (CBO) has repeatedly found that amnesty for illegal aliens would be a net fiscal drain for American taxpayers while driving down U.S. wages.

Every year, 1.2 million legal immigrants receive green cards to permanently resettle in the U.S. In addition, 1.4 million foreign nationals are given visas to take American jobs while hundreds of thousands of illegal aliens enter the U.S. annually.

John Binder is a reporter for Breitbart News. Email him at [email protected] Follow him on Twitter here.