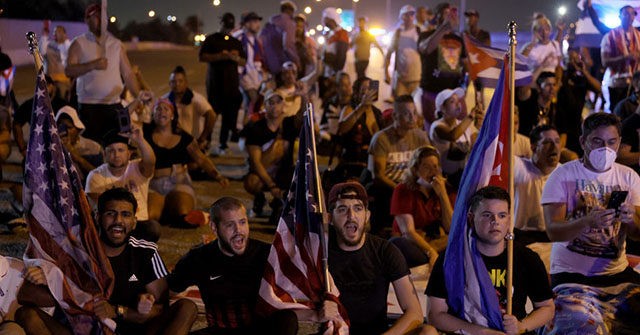 A series of tepid and inaccurate statements from President Joe Biden and his administration are meeting growing calls this week for the American government to act to prevent the further loss of life in Cuba.

Protesters took the streets in dozens of municipalities nationwide in Cuba on Sunday; some estimates suggest as many as 60 cities and towns rose up demanding an end to communism. The protests were the culmination of nearly two decades of organized dissident action in the country since the Black Spring of 2003, that last major violent crackdown en masse on pro-democracy voices in the country. Protesters chanted “freedom!” and other anti-communist slogans, making clear their demand was an end to the 62-year-old Castro regime.

The Cuban Communist Party responded by issuing an “order of combat” commanding all communist loyalists to take the streets and violently assault peaceful protesters. It also shut down the internet for much of this week, making international reporting on the matter extremely difficult. The little information Cubans have managed to get out of the island indicates that protests have continued daily since Sunday despite widespread reports of police gang beatings, assassinations, and deadly door-to-door raids.

The violence, much of it caught on video, prompted a wave of protests nationwide in the United States in solidarity with the protesters. Cuban-Americans in every major population hub they have in the country have taken the streets in urged Biden to do more than offer verbal solidarity with their brethren.

Biden’s administration has so far falsely stated that the protests are about the Chinese coronavirus pandemic — on multiple occasions — and has taken no action in response to the situation. Biden himself issued a statement urging “the Cuban regime to hear their people and serve their needs at this vital moment instead of enriching themselves,” without mentioning communism or socialism, the issues the protesters are actively opposing.

Miami Mayor Francis Suárez (R) made the most prominent call for U.S. military action so far on Fox News on Tuesday.

“What should be being contemplated right now is a coalition of potential military action in Cuba similar to what has happened in both administrations in both Republican and Democrat administrations,” Suárez said. “And Republican — with Bush in Panama, they deposed Noriega. And that country had peaceful democracy for decades. And you had interventions by a Democratic president taking out Osama bin Laden in Pakistan.”

Suárez added that airstrikes against the regime is an option “that has to be explored and cannot be just simply discarded as an option that is not on the table.”

Suárez made a similar call to action in a press conference prior to the interview this week, joined by several other prominent American politicians including Rep. María Elvira Salazar (R-FL).

At least one Democrat in the country — the mayor of Union City, New Jersey, the largest Cuban-American enclave in the country outside of Florida — has similarly demanded military intervention.

“We need to see action. We need to see military action,” Mayor Brian Stack told hundreds assembled at a rally on Tuesday in New Jersey’s north Hudson region. Speaking to NJ.com, Stack added, “I believe the United States should’ve been there years ago. Just like we’ve liberated other countries, we should liberate Cuba, make that country free for the Cuban people. Stop all the politics all around.”

A petition at Change.org urging military intervention has attracted nearly 400,000 signatures as of Wednesday, suggesting the idea is more popular than many establishment media outlets in the United States have suggested.

“The free Cubans around the world petition, without a doubt, for a MILITARY INTERVENTION by the United States of America and NATO to put an end to the Castro/Diaz-Canel regime and liberate the Cuban people who live in terror, misery, hunger and coercion!” the petition reads in part.

What such an intervention would look like is the subject of much speculation — and much debate. The Assembly of the Cuban Resistance, a coalition of dissident organizations on the island, published a five-point plan to liberate Cuba on Sunday:

Speaking to Breitbart News, Orlando Gutiérrez-Boronat, the director of the Assembly, listed military intervention as one of the factors in a greater plan for the U.S. government to properly aid the Cuban people. Cuban activists, he noted, must “push for decisive international intervention led by the U.S. to protect the Cuban people and isolate and end the communist regime.”

“Intervention means decisive military action,” Gutiérrez-Boronat added. “There are many different ways of this being done — humanitarian assistance, but also as part of the military intervention, that is the most important and decisive.”

The Assembly further demands the U.S. government not lift any sanctions against Cuba “or its satellite regimes in the region” (Biden already defied this one by lifting sanctions on Venezuela on Monday), help improve telecommunications on the island to prevent the regime from shutting down internet and cutting information access; and recognizing a provisional authority of members of the Cuban resistance to help guide the transition away from communism.

Assembly members have been working for months on a plan to facilitate the peaceful transition away from the current regime. Over 20 organizations belonging to the Assembly organized a nationwide “Congress of the Cuban Nation” last month to discuss the political underpinnings of a post-communist, free Cuba, including the creation of a transition government and free and fair elections. The meetings sought to create “a new republic — [to] create a roadmap for transition and reconstruction of the country in all sectors.”