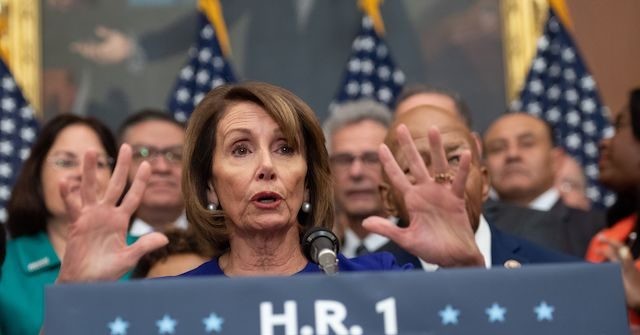 The Arizona State Legislature passed a resolution on Tuesday vowing defiance of HR 1, the effort by Democrats to nationalize the administration of elections described by its opponents as “The Corrupt Politicians Act.”

The Democrat-controlled U.S. House of Representatives passed the bill on March 3 in a straight party line vote, 220 to 210, and it is currently under consideration in the U.S. Senate.

Whereas, House Resolution 1 (H.R. 1), a bill introduced in the United States Congress, would obliterate the constitutional arrangement between the states and the government of the United States by usurping the constitutional power of states to manage, control and administer state elections by prohibiting various practices and mandating others such as forcing states to conduct an election over an extended period of time, prohibiting states from maintaining voter rolls free from error and obsolete information and forcing states to accept an elector who does not register to vote in advance, mandates related to mail voting, prohibitions against regulating ballot harvesting and scores of other intrusions into the power of states to manage, control and administer their elections.

And Whereas, the power over elections was preserved explicitly for the states by the Constitution; and Whereas, H.R. 1 strikes at the very heart of the arrangement that gave rise to this nation, namely that states are sovereign and free from interference and the intrusion of power from the government of the United States absent clear constitutional authorization.

Therefore, Be it resolved by the House of Representatives of the State of Arizona,the Senate concurring:

…the Secretary of State of the State of Arizona transmit a copy of this Resolution to the President of the United States Senate, the Speaker of the United States House of Representatives, each Member of Congress from the State of Arizona and each Speaker of the House of Representatives and each President of the Senate of the other state legislatures.

“The ‘Corrupt Politicians Act’ is the most dangerous piece of legislation to come out of DC in generations. The bill reflects Democrats’ attempt to rig America’s electoral system in their favor and strip voters of their civil right to have their vote matter,” State Rep. Jake Hoffman (R-Queen Creek), primary sponsor of HRC 2023 in the Arizona House, told Breitbart News.

Arizona Congressman Andy Biggs (R-AZ) added his support for the resolution passed by the Arizona legislature.

“While most of the country has some doubt as to the integrity of our elections, the Democrats want to ensure that we never have an honest election again. If we do not stop H.R. 1, it will become increasingly difficult to restore trust in American elections,” Biggs said in a statement released by State Rep. Hoffman’s office.             ‘

“The Constitution delegates the power over elections to the legislature and we intend to fiercely oppose any effort by corrupt politicians in Washington, DC, to interfere with our sovereign authority,” Hoffman added in that statement.