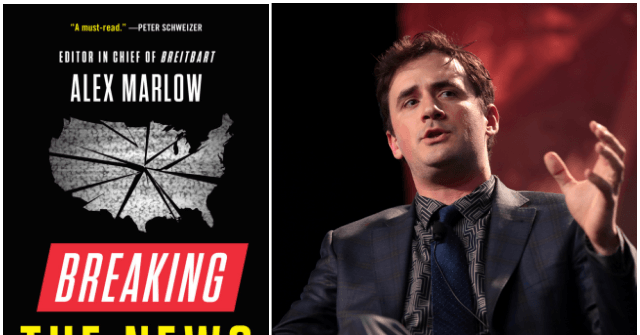 He identified integration of news media outlets into multi-billion-dollar corporations as a cause of deepening industry corruption beyond bad faith claims of political neutrality.

“Now, the enforcers of the anti-science mask mandates will be the corporations, because the corporations are getting increasingly left and increasingly woke,” he remarked. “Most of the world seems to be pretty coached up on [the fact] that the establishment media is biased to the left. They have a liberal bias.”

He continued, “[In] the book Breaking the News, I take it further, and I connect the two. Now it’s no longer simply a liberal-conservative divide. That is way too mild. First of all, the establishment is now weaponized. They are now on the attack. It is not merely that they’re slanting the news. They’re directing their news specifically to get scalps, to get victories.”

“It is not just about them being liberal,” he added. “It’s also about them being globalists and corporatists, because if you think about this — for example, NBC News, we all hate NBC news, right? — but NBC News is part of NBC-Comcast-Universal, and it’s only one branch on a very large corporate tree with international interests all around the world and in a million different ways.”

Journalistic outlets are under constant pressure to ensure they are not “putting up a story that conflicts with one of the vested interests of their giant conglomerate,” Marlow stated.

Boyle highlighted the impossibility of political objectivity in news media. He encouraged news media outlets to be transparent with their political biases and end deceptive presentations to the contrary.

“The institutional flaw with the establishment media is [that] they’re all built on a lie, which is they claim to be objective,” he said. “There’s no such thing as objectivity, because literally every decision we make — from which stories we cover to which ones we don’t, to who we interview and who we don’t, to which quotes we use and which ones we don’t — everything we do has the opportunity for the insertion of bias, either intended or not.”

He added, “Breitbart is almost the mirror reflection of that failed system in that we’re built the proper way. We are open and honest with our audience about what it is that we believe. … CNN claiming to their audience that they’re objective [is an institutional flaw]. They can’t claim that. If they were just honest that they were on the other side, that they’re leftists and that they want the Democrats to succeed and the Republicans to fail — generally speaking — then I think they would get a lot more credibility back, but I don’t know if their institution is going to have to crumble for that to happen.”

“This is where the book becomes a how-to manual, because you see there are all these patterns and narratives, and this is what we’ve been the best at at Breitbart — it started with Andrew [Breitbart] and it continued with Steve [Bannon] and it continues with the rest of us — which is spotting these narratives and seeing how the left behaves,” he added.

Breaking the News will be released May 18.