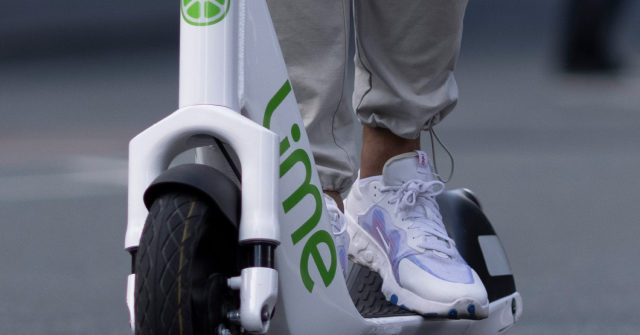 London has seen a 50-fold increase in offences committed by criminals on e-scooters in London, with significant rises seen across the country.

Around 40 cities and towns in the UK are piloting electronic scooters, with the vehicles only allowed on roads and cycle lanes and their speed capped at 15.5 mph. They can only be driven if rented from licenced operators and while private ownership is permitted, private scooters used in public places is not. The Department for Transport will decide next year whether to fully legalise all vehicles, including private ones.

But a growing number of crimes have been linked to the vehicles since they were legalised for limited use last year, including assault, robbery, and narcotics possession.

The Times reports that 206 crimes related to suspects on electric scooters were recorded in London in the first four months of 2021 alone — up from four in the same period last year. London police have seized 2,000 illegally used e-scooters since the start of 2021, last month confiscating 507 in one week.

It would not be the first time that criminals took advantage of light vehicles to commit crimes, with 2018 seeing a spike in muggings by criminals on mopeds.

There have also been a number of injuries associated with riders not following the rules.

In April, the driver of an e-scooter illegally riding on the pavement struck from behind a three-year-old boy who was walking with his grandmother in Feltham, West London. The suspect fled the scene, leaving the small boy with two broken collar bones.

Passersby Robbed Woman After Fatal E-Scooter Accident as She Lay in Street https://t.co/dGpyIjhRNz

The month before in Leicester, a six-year-old boy was left with a fractured skull and memory loss after being hit by an e-scooter.

In the UK last month, a 20-year-old man riding an e-scooter died following a collision with a car in Wolverhampton.

France has also seen fatalities caused by riders battery-powered scooters, including when last month two women, believed to have been drunk at the time, on e-scooters fatally hit a 31-year-old woman walking in Paris. There are also reports in the UK of police arresting e-scooter riders for driving while intoxicated.

There have been other non-fatal injuries, including this month in Coventry, a 15-year-old boy on an e-scooter was hospitalised after colliding with a car. Two teen girls riding one scooter in Merseyside were also injured when they collided with a car on Sunday.

Green advocates claim could reduce pollution if used as an alternative to private vehicle use. However, reports in recent years suggest that even if the vehicles are eco-friendly themselves, the materials used to make them and their batteries and efforts to charge them are not ‘carbon-free’.

Writer Peter Hitchens has taken up a personal crusade against the vehicles, said that if fully legalised, the risk of injury to pedestrians will get “much, much worse”.

Hitchens likewise predicted in an article for the Daily Mail earlier this month that e-scooters, which he said can carry two grown men, “are the perfect tool” for drug couriers and other criminals.